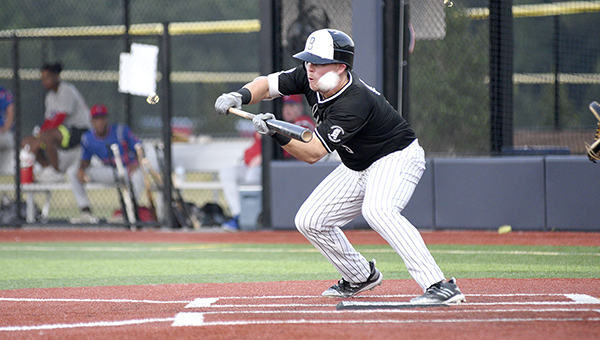 The Hattiesburg Black Sox’s Colby Collier (5) bunts against the West Chase Express during a game in June at Sports Force Parks. The Black Sox will play the U.S. Military Baseball Organization in a three-game series at Sports Force beginning Friday night at 6:30. (Courtland Wells/The Vicksburg Post)

Black Sox back in action in Vicksburg this weekend

That wasn’t an option this year because of the COVID-19 pandemic, so she decided to provide others with a chance to watch some baseball.

Aby’s team will take on the U.S. Military Baseball Organization in a three-game series beginning Friday night at Sports Force Parks on the Mississippi. It’s the second of four weekends this summer that the Black Sox, an amateur team that includes a number of former college and pro players — as well as a handful of players from Warren County — will play at Vicksburg’s sports complex.

The teams will play a single game Friday at 6:30 p.m., and then a doubleheader Saturday starting at 4:30 p.m. Both of Saturday’s games are scheduled for seven innings.

“This is the heart of our season, and we’re excited about kicking it off by playing these guys. It’s honorable that they play to recognize these veterans and active duty military members,” Aby said.

The U.S. Military Baseball Organization is a barnstorming team that is not affiliated with the Department of Defense. It was founded in 2016 and gives veterans and active duty military members an opportunity to play and honor both baseball and the military.

The team held local tryouts at Sports Force Parks earlier this week, and will bring in players from several states for this weekend’s games. It will also hold free youth clinics at Sports Force on Friday and Saturday, from 8:30 a.m. to 12:30 p.m. each day.

Before each of the games with the Black Sox, Aby said the teams will honor veterans in attendance. Veterans and active duty military will receive free admission to the games. For all others, admission is $10 per person for each game or $15 for a weekend pass. Fans must bring their own chairs, since the bleachers at Sports Force Parks are blocked off in accordance with Mississippi’s COVID-19 guidelines.

“They contacted us about a year ago about playing, and we couldn’t fit it in our schedule. We made it a point to get it in this year so people could watch baseball on the Fourth of July,” Aby said. “They spend the week here and bring in players and people that support the military. Their whole goal is to honor the U.S. military.”

The Black Sox originated in Hattiesburg as a Negro Leagues team in the 1940s. They have kept the city in their name, but are now an amateur team based more loosely in Central Mississippi. Their home for the 2020 season is Sports Force Parks.

The Black Sox played a three-game series against the Houston, Texas-based West Chase Express at Sports Force in June. They’ll also host the Mississippi State Amateur Baseball Tournament there July 24-26, and Aby said a three-team tournament against a couple of Louisiana teams is tentatively scheduled for July 17-19.

The Black Sox will also go on the road for a series next weekend.

Aby said about 150 people attended games during the first series against the Express, and was happy with the reception the Black Sox have gotten in their new adopted hometown.

For more than 100 years, high school football has been a fall tradition in Mississippi. The first record of games... read more