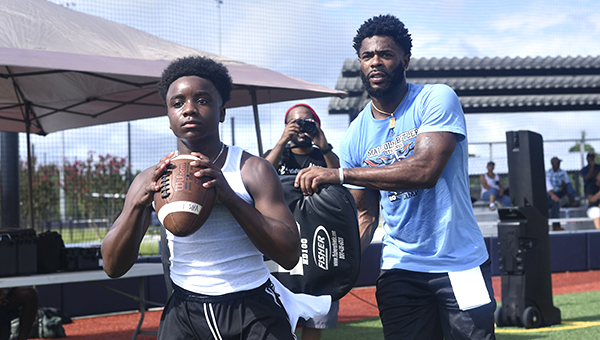 The COVID-19 pandemic will not cancel a new Vicksburg summer tradition, but it will alter it for a year.

The Malcolm Butler Football Camp will go virtual for its sixth edition on July 18. Campers will be able to go online using Google Hangout and do workouts, ask questions and interact with the Tennessee Titans cornerback and former Vicksburg High star.

Players will do their workouts at home, while Butler will do it from his base in Nashville. Camp organizer Cynthia Bell said the virtual camp was a way to keep children engaged, while also keeping them safe from the coronavirus.

“We were planning it way back in November and then corona hit and we said, ‘Uh-oh. How are we going to do this?’ If kids are able to get access to a computer or phone they can take part, and the school district has given everyone a computer,” Bell said. “We went over it and Malcolm said, ‘Let’s do it.’ He really wants to be here and do it in person, but we don’t want to put anybody at risk.”

Butler is entering his seventh NFL season, and third with the Titans after spending the first four with the New England Patriots. He started the camp in 2015, the summer after his rookie season when his last-minute interception at the goal line sealed the Patriots’ 28-24 victory over Seattle in Super Bowl XLIX. Since then, as many as 300 people have participated in the free camp each July.

With the pandemic still going in full force, however, this year’s edition required some creativity to pull off. Rather than gathering at Vicksburg High or Sports Force Parks, campers will need to log in as well as show up.

Players can register at malcolmbutlerfootballcamp.org, and must fill out an application and release forms. From there, they will receive a link to for the Google Hangout session.

The camp is free, but registration is limited to about 150 people per session, Bell said.

“We can only get about 150 people, where he can see the students and actually interact with them,” Bell said.

She added, however, that one of the benefits of a virtual camp is that the material can be saved and accessed later.

“If they’re not able to load it then, they’ll be able to go back and load it at another time,” Bell said.

The 2005 Porter’s Chapel Academy Eagles posted one of the most dominating defensive seasons of the 21st century, on any... read more