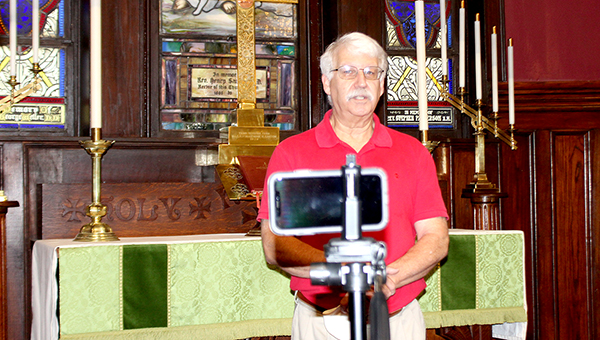 Wednesday morning the Rev. Sam Godfrey, rector of Christ Episcopal Church, walked into the church’s sanctuary and put its morning prayer service back on the air.

Streamed live over the church’s Facebook page, the 15-minute service is broadcast Monday through Friday starting at 8:30 a.m. and continues a tradition Godfrey began 23 years ago after graduating from the seminary. It was temporarily suspended in late June when Godfrey took some vacation time.

Godfrey said the idea for the service came from his own experience in the seminary at The University of the South in Sewanee, Tenn.

“We did it at Sewanee,” he said. “We had daily morning prayers at Sewanee and I’ve done it ever since.”

He first held the service when he was rector of Holy Innocence Episcopal Church in Como.

In the past, several church members would attend the service in the church sanctuary, Godfrey said, adding, “Usually it was me and one or two or three people and sometimes it was just me.”

That changed with the COVID-19 virus, which moved the service to social media.

“I’ve been doing it online since March,” he said. “I felt like people needed it. I didn’t know how to do it online then, now I do.”

At first, Godfrey presented the service through his personal Facebook page.

He said he welcomes between 10 and 20 people each morning on Facebook.

“Doing it on Facebook, people will comment and every now and then someone will offer up a prayer request, but it’s created kind of an online community of people who watch morning prayer Monday through Friday at 8:30,” he said. “We have a growing online community on morning prayer, doing it strictly online. If somebody showed up I wouldn’t tell them ‘go away.’ It’s a way to stay connected and a new way of doing things.”

There is value and merit to both sides of…