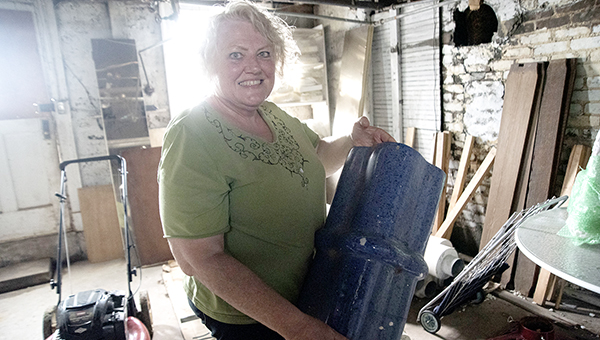 Owner of historic home sends out plea for missing, iconic and custom tiles

Cindy Thrana, who owns the historic Old Feld Home on Cherry Street and who is working to restore the iconic home to its prior glory, is sending out a plea for help.

Recently, one of the distinctive roof tiles was returned to Thrana, who purchased the home in 2018 and has been working on extensive repairs, including to the roof which features blue, terracotta tiles.

After the tile was returned, Thrana said she put out an appeal on Facebook in hopes of finding more that had, over the years, made their way from the property.

“If anyone has any blue roof tiles to my property will you please return them? Many tiles sat outside while this house was vacant. Some were broken and thrown and some walked away as souvenirs,” Thrana’s post reads. “I did get one piece returned to me that someone was using in their garden. These tiles are expensive and custom. I still have several areas with missing pieces. Please help me save a national treasure! I would greatly appreciate it! 2108 Cherry St. Just drop it off and thanks again!”

As for the one tile that was returned, it was just by chance that it made its way back home.

Thrana said a carpenter, Jamie Berryman, had come to the house to help repair some rusted door locks. Berryman mentioned that he had a friend who had one of the roof tiles from the home and was using it as a decorative piece in her garden.

Berryman then offered to see if he could get the tile back.

He did, and upon its return, Thrana said, the recovered piece turned out to be one of the more expensive tiles because it had been designed to fit at the corner of the roof.

In 2005, the home — which was then owned by Russell Puckett — had sustained roof damage from Hurricane Katrina after a tree fell on the north side of the house and broke many of the custom tiles.

Puckett had ordered replacements — twice, in fact, since the shade of blue that was used to make the custom-made tiles had not been a match.

In an earlier story that ran in The Vicksburg Post, Harvey Smith, who had served as the executor of Puckett’s estate, said, “The chemist developing the formula charged $600, and the first order they did was the wrong color. So they said throw it away and send another order.”

Unfortunately, Puckett died before the repairs to the roof had been completed and for several years they remained on the property, unattended. That’s when a number of the tiles disappeared.

She said she is hoping that by reaching out on social media, others who may have wanted a “souvenir” of the Nationally Registered Home might feel called to return them.

“Just lay them on the porch, no questions asked,” Thrana said.

The terracotta tiles used on the Mediterranean Romanesque style home were made by Ludowici, a company that dates back to the 1800s when Carl Ludowici, a descendant of the Ludovisi family in Italy, opened a factory in Chicago.

Thrana said she is holding out hope of finding more missing tiles, especially the large humped tile that goes on the top of the house. In the meantime, though, she is appreciating all the positive feedback she has received about her home from messages on social media.

Nearly a month later, the search for Lindsey continues

For nearly a month, law enforcement agencies at the local and state levels have searched for 63-year-old Harold Lindsey with... read more