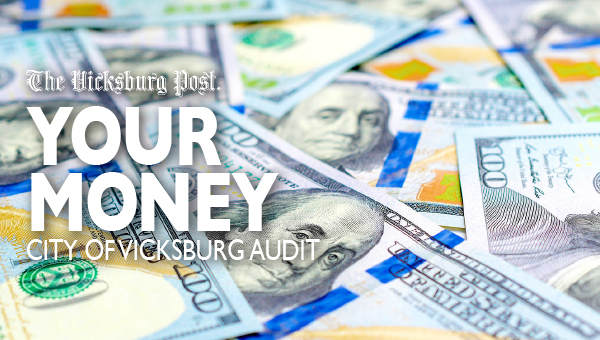 Audit of city’s finances a reflection of ‘fiscal responsibility’

An audit of Vicksburg’s fiscal 2019 finances shows the city finished the year in good financial shape with a net worth of $116 million.

Auditor Booker T. Camper told the Board of Mayor and Aldermen Friday the city’s $116 million net worth was the difference between $235 million in assets and $117 million liabilities. The net worth for the city in the fiscal 2018 audit report was $117 million.

The report comes as the board prepares for meetings on the city’s fiscal 2021 budget.

Looking at the city’s present financial situation, Mayor George Flaggs Jr. said the loss of revenue caused by precautions involving the COVID-19 virus has left the city with a $2.2 million deficit, “But this audit report will allow us to have a framework going forward because we’ll know where our strength is.”

At the same time, he said, officials have determined the city may have some surplus revenue and reserve revenue sources and enough interest on money in bank accounts that may equal more than $800,000.

“That’s the reason we made an announcement in the city (in June) that we believe we wouldn’t have to layoff or furlough a massive number of employees,” Flaggs said.

The mayor also issued a warning to city department heads about preparing their budgets.

“I can’t see us having a $2.2 million budget shortfall in this quarter and it not affect us in 2021 if the revenue’s not there,” he said. “Division heads, if you know you’re not going to get the money, don’t ask. We’ll probably end up adopting the same budget we did last year for a few capital expenses.”

Candi Winger, a nurse at Merit Health River Region who works on the hospital’s Medical-Surgical floor, has been named the... read more