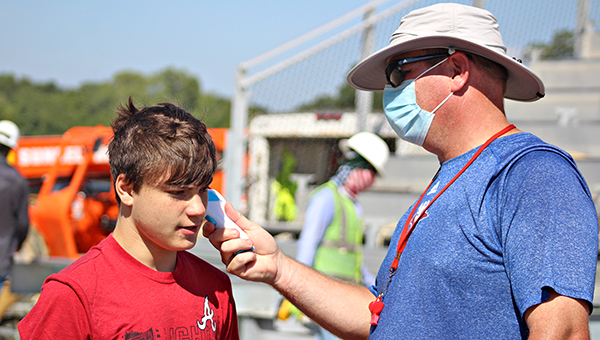 Warren Central football player Dillon Massey, left, has his temperature checked by assistant coach Matt Williams upon arriving for practice on Monday. The Mississippi High School Activities Association announced Tuesday that it will delay the start of the 2020 season until Sept. 4. (Ernest Bowker/The Vicksburg Post)

High school football will be played in Mississippi this season. It’ll just take a little longer to get here.

The Mississippi High School Activities Association’s executive committee voted Tuesday to delay the start of the 2020 season two weeks, until Sept. 4. The decision came in the wake of a rising number of COVID-19 cases across the state and the country in recent weeks.

Preseason football practice will be allowed to begin on Aug. 17. The regular season had originally been scheduled to start Aug. 21. Teams may continue summer workouts until school begins on Aug. 7.

The first two games of the football season will be canceled and not rescheduled.

The fall sports of volleyball, swimming and cross country will begin with practice on Aug. 10 and games on Aug. 24.

Executive director Don Hinton said the MHSAA voted for a delay from among several other options, including pushing football to spring; canceling the season entirely; or a longer delay. Most of the options were discussed at length at another meeting on June 30, and then again for several hours on Tuesday.

“If we’re able to follow this, we won’t affect our winter or spring seasons at all, so we think it’s a good plan,” Hinton said at a press conference following the vote at the MHSAA headquarters in Clinton. “If there’s a time to make a change, we’ll do that as well.”

MHSAA executive committee president Kalvin Robinson said the delay will also help in the transition back to a normal school year.

“The board felt these changes will give all of us more time to try to get back into the routine of school,” Robinson said. “There are going to be many challenges — ones we’re anticipating and those we don’t even know about yet — in returning to on-campus learning. It’s going to be different than what we’ve experienced in the past. Hopefully pushing back the start of the fall sports seasons will help make that transition a little smoother for everyone involved.”

Canceling the first two games of football season likely means the Red Carpet Bowl, scheduled for Aug. 17, will not be played.

On the bright side, Vicksburg Warren School District athletic director Preston Nailor said, the loss of only two games creates a unique season opener. Vicksburg will play at Warren Central on the new opening night, on Sept. 4.

“It’s exciting because we used to play this as the last game and now we’ll play it first. It’ll set the tone for the season,” Nailor said. “We’re excited to be able to play it, because they had been talking about canceling three or four games. If they did that, we would not have been able to play this game. We’re going to take it and roll with it.”

Nailor and Hinton both said there are a number of issues still to be sorted out in regards to how games will resume. There has been no firm guidance, for example, on the number of fans that will be allowed to attend — if any at all. Teams will also have to deal with social distancing rules on the sideline, sanitizing equipment, transportation, and a host of other logistical concerns.

Nailor said the delay gives athletic directors across Mississippi time to deal with those.

“When you think of the safety of the kids, it gives us all an opportunity to create a plan instead of rushing back. It gives us two more weeks to get a handle on it. I’m fine with the actions that have taken place,” Nailor said. “You want to protect the individual communities as well as the players and coaches. We have not gotten guidelines on game day stuff, but I hope that comes very soon.”

Hinton said the delay also allows the MHSAA to revisit the situation if events warrant. In the past week, several college conferences have canceled their fall seasons entirely and several others announced they will only play conference games in football. On Monday, the National Junior College Athletic Association voted to push its football season to the spring.

“We’re 50 days away from playing and it could change four times before then,” Hinton said. “We’ll see where we are.”

Hinton added that moving football to spring and bringing non-contact sports like baseball and track to the fall was not a popular option among anyone involved with the process. Having already lost the 2020 spring season, those coaches were not eager to risk losing another. Keeping spring sports in the spring along with football also would have forced many multiple-sport athletes to choose one or the other.

“We had that as an option, but we affected our spring sports athletes so much, and the possibility of flipping those seasons to move football was not something we felt was the best option. Then you have the possibility of those seasons being delayed and not played at all,” Hinton said. “If we move everything to spring, we have coaches and players who do more than one sport. That could have been an issue as well. There were several issues there.”

The second big upset in the Eagles Region came from the seventh-seeded 1981 St. Aloysius Flashes, who beat No. 2... read more