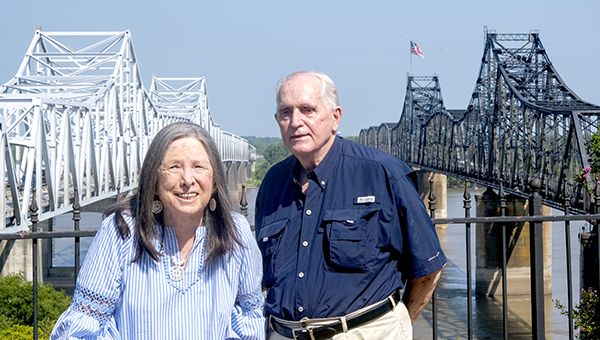 Linda and Jimmie Christian are pictured Tuesday at the Mississippi Welcome Center following a ceremony dedicating a flag flying over the Old Hwy. 80 bridge in honor of his 22-year career in the U.S. Air Force. (Courtland Wells/The Vicksburg Post)

The Army-Navy Club of Vicksburg raised a new flag over the Old Hwy. 80 Bridge Tuesday to honor a local veteran and his service to this country.

The ceremony flag honored U.S. Air Force Senior Master Sgt. Jimmie I. Christian (Ret.) and his 22 years of service in the Air Force. During his service, Christian served in security forces and law enforcement, and in the Vietnam War.

In addition to the flag being raised in his honor, Tuesday also marked Christian’s 80th birthday.

The ceremony, which was held at the Mississippi Welcome Center, is part of the Army-Navy Club of Vicksburg’s Bridge Flag Project. The project arranges for flags to fly over the bridge that spans the width of the Mississippi River.

“It’s an honor. I’m a patriotic person and always honor and salute the flag,” Christian said. Joining Christian at Tuesday’s ceremony was his wife, Linda.