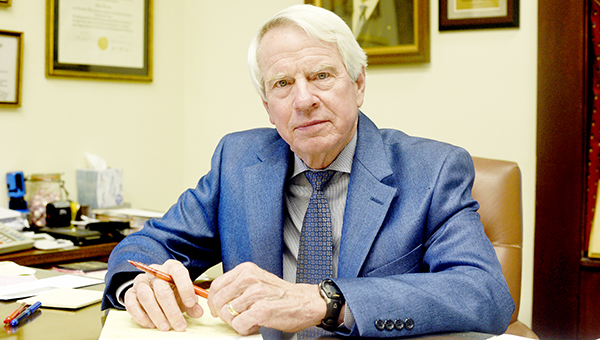 Vicksburg attorney Mack Varner was one of three people appointed Wednesday by Lt. Gov. Delbert Hosemann’s to the Commission to design a new State flag.

Varner said he could not wait to get started on the process and even canceled a trip knowing that many meetings will ensue.

“I’m extremely excited and this is going to be something special and meaningful,” Varner said. “It’s an enormous responsibility and I want the flag to include everybody and for everyone to be proud.”

Hosemann made three appointments to the commission. Along with Varner, he appointed Justice Reuben Anderson of Jackson and Sherri Carr Bevis of Gulfport. Anderson is a former Justice of the Mississippi Supreme Court and Bevis is a public school teacher from Gulfport.

“These three individuals, and the others who are charged with recommending a new flag, have a heavy responsibility to bear in the coming weeks. Because of their character, and the diversity of their backgrounds and perspectives, I have confidence they will come to a conclusion which will be respectful of our past and reflect a bright future,” Hosemann said.

The Commission, established by House Bill 1796, is charged with making a recommendation to the general electorate on the design of a new flag. The Speaker of the House and Governor are also provided three appointees for a total of nine members. The legislation requires the Commission to make its selection by Sept. 14 and provides any new design must include the words “In God We Trust,” which also adorns the State seal.

To become Mississippi’s new state flag, a majority of voters during the Nov. 3 General Election must approve the design.

“Ultimately, the people of Mississippi will decide whether this design or some other design, should be the flag of our future,” Hosemann said.

Varner currently practices family and business law in Vicksburg. He received his undergraduate degree from Millsaps College and law degree from the University of Mississippi School of Law. He is the past president of the Friends of Vicksburg National Military Park and Vicksburg Convention and Visitor’s Bureau and formerly served on the Board of Trustees for Millsaps College.

Bevis was recently named Community Relations Liaison to the Singing River Health System. She received her bachelor’s degree in communications from Mississippi State University and a master’s degree from George Washington University.  She previously worked as Assistant Secretary of State for External Marketing for the Secretary of State’s Office, and as a public school teacher in the Bay-Waveland and Hancock County School Districts. Bevis is the current national president of the Mississippi State Alumni Association.

The Army-Navy Club of Vicksburg raised a new flag over the Old Hwy. 80 Bridge Tuesday to honor a local... read more