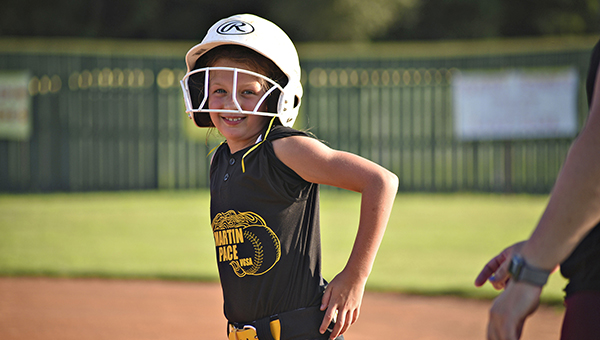 It’s not hard to figure out why. Delayed more than two months by the COVID-19 pandemic, and then filled with precautions to prevent the virus from infecting coaches, players and fans, this was a season unlike any other. It ended Monday night with the championship games in the 8U and 16U age divisions, and a sigh of relief that everything went off without a hitch in the end.

“I’m real pleased we made it through our season, and as far as I know we had no COVID cases with our girls. None of them stopped coming,” Jackson said. “The main thing is we made it through what we were calling ‘The COVID Season’ and didn’t have any major issues or disagreements. It all goes back to the coaches and the board members to make things happen and get it done.”

Opening day for the VGSA was scheduled for late March. When the COVID-19 virus burst onto the scene and the country locked down, however, that was delayed along with everything else. Games eventually started at the beginning of June, with approximately 180 of the 256 players who had originally signed up still involved.

Hot summer weather, family obligations and lack of desire took away more players than fears about the virus, Jackson said. It forced the league’s board to rework some rosters and schedules.

“The main challenge was to keep players together. We lost a few teams and took the girls that played on those teams and made other teams out of them. It was a bunch of girls that wanted to play,” Jackson said. “The girls did fantastic, and did what we needed to do. The coaches did a great job holding it all together.”

The other obvious challenge came from dealing with the virus. The precautions used to prevent players from getting sick included frequent use of hand sanitizer and social distancing among fans and in dugouts.

Coaches and league officials went through a checklist of protocols every night games were played. Jackson said that quickly morphed from an annoying chore to routine procedure.

“When it started, it looked like it was going to be a pain. But as we started doing it, it wasn’t that big of a deal,” Jackson said. “Everybody did what they needed to do.”

After six weeks of games, the league’s 2020 champions were crowned on Monday — White’s Heat and Air in the 8U age division; Jeffers Remodeling in 10U; Cap Center in 12U; and Jackson Heat & Air in the 16U division.

Even crowning a champion was not easy, though. Thunderstorms last week forced the VGSA to postpone the championship games for several days and work around a number of schedule conflicts among players on the teams involved. Like everything else, however, Jackson, his coaches, board members and the players all found a way to get the job done.

“We were glad to be able to get the season in and get it completed before anything else happened,” Jackson said.