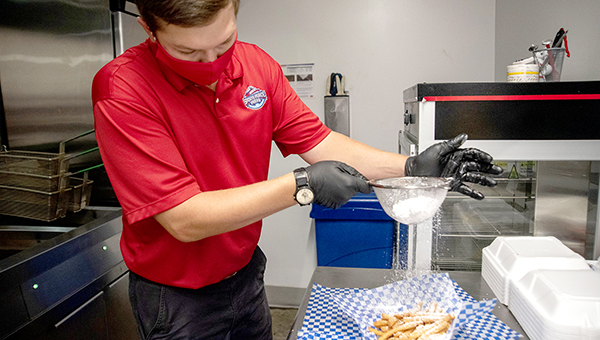 Sports Force Parks on the Mississippi hospitality manager Corey Jones prepares an order of funnel cake fries. The sweet treat is one of the most popular items for guests visiting the sports complex on Fisher Ferry Road for weekend tournaments. When the Vicksburg Warren Athletic Association begins its upcoming youth baseball season, the treats will also be available for purchase. (Courtland Wells/The Vicksburg Post)

When it comes to the five senses, sight and sound are certainly recognizable at a baseball park.

There is the ping of bats making contact with balls, team chants reverberating across the field, and the uproar of a cheering crowd when a player makes it across home plate.

Wire fencing and nets to protect the spectators from fly balls is seen as well as folding chairs, tents and wagons to hold all the gear.

And, while the heat on any given day can be felt at the park, the two senses that can make the day fun and memorable are taste and smell.

No one knows this better than Corey Jones, who is the hospitality manager at Sports Force Parks on the Mississippi.

While the local ballpark offers the typical fare — pizza, hamburgers, hot dogs and nachos, along with chicken wings and pulled pork, it is the aroma of the funnel cake fries that sends fans to the concession stand.

“Once we start cooking the fries the aroma from them spreads throughout the park,” Jones said, making the sweet treats a Sports Force favorite.

Currently offered on tournament weekends only, Jones said, once the Vicksburg Warren Athletic Association begins its season the beignet-like pastry that is described as crispy on the outside and fluffy on the inside will become a staple on the menu.

More like a confection and not a deep-fried potato, these mouth-watering delectables are covered in powdered sugar.

During a tournament season, Jones said, he goes through 20 pounds of the pulverized sugar.

The number of funnel cake fry orders is another dead giveaway as to their popularity.

Jones said on tournament weekends when players, parents, and a plethora of sports enthusiasts come out for games, 125 to 150 orders of the sweet-tasting fries are placed.

Sports Force Parks on the Mississippi, located at 255 Fisher Ferry Road, is a haven of young and young at heart, and to make sure the visitors remember their trips to the local park, Jones said, they wanted to offer visitors something unique.

‘Gold in the Hills’ will continue its historic streak

The Guinness Book of World Records’ longest-running show is not letting the COVID-19 pandemic interfere with its historic run. “Gold... read more