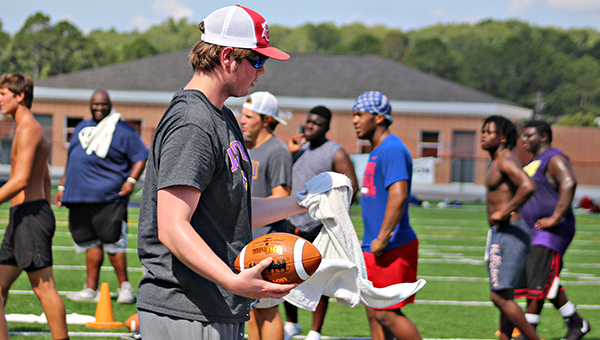 Warren Central football manager Will Thigpen wipes down a football during practice on Monday. Teams are required to sanitize balls between plays in accordance with state COVID-19 guidelines. (Ernest Bowker/The Vicksburg Post)

In an offseason of uncertainty, Warren County’s high school football teams have learned to employ some flexibility. It’s helping them roll, once again, with the latest major change to the schedule.

The Mississippi High School Activities Association voted on Tuesday to delay the start of the 2020 season by two weeks in response to a recent spike in COVID-19 cases in the state. The decision wiped out the first two games of the season and pushed opening day to Sept. 4. It has also forced coaches and teams to make yet another adjustment to an ever-changing schedule.

“All your good coaches and good football teams are able to adapt. This is something that no one has ever been through, so it’s a learning curve every single day,” Vicksburg head coach Todd McDaniel said. “We do have a set date, but who’s to say that’s going to hold? We’re going to keep preparing the best way we can and hopefully we’ll be able to get the infection rate down and get school and the season started on time.”

Although the MHSAA’s decision canceled the first two weeks of the season, it might only cost teams one game. Week 5 of the high school season is normally a bye week for most teams before region play begins. Warren Central coach Josh Morgan said there has been talk among coaches around the state of playing that week instead.

Warren Central has not yet filled its open date, but Morgan said he has talked with Pearl’s coaches about playing on Sept. 18. WC and Pearl had originally been scheduled to play on Aug. 28.
“The common opinion is, after you’ve missed the first two weeks it’s not as crucial as it was to have that bye week,” Morgan said.

Preseason scrimmages and jamborees might be more difficult to reschedule. Warren Central was supposed to play Madison-Ridgeland Academy on Aug. 14, but that has been definitively canceled. MHSAA schools cannot begin practice until Aug. 17, and the Mid-South Association of Independent Schools — of which MRA is a member — is still scheduled to begin its season on Aug. 21.

Vicksburg’s schedule is also in flux. The Gators have arranged a preseason scrimmage against Wingfield on Aug. 28, and filled the open date on Sept. 18 with a road trip to Natchez. Another road game at Benton, La., on Sept. 11 is in jeopardy, however, because of COVID-19 restrictions in Louisiana.

McDaniel said the Benton game has not been canceled yet.

“They told us that they wouldn’t mind if we found someone else, though,” McDaniel said.

The MHSAA first suspended activities statewide in mid-March, and eventually canceled the football spring practice period as well. Vicksburg and Warren Central both resumed offseason workouts on June 15, but have been playing catch-up as they acclimate players to the summer heat and condense six months worth of activities into a six-week period.

The official start of preseason practice — when teams can put on pads and helmets — will now be Aug. 17 instead of the original date of Aug. 3. 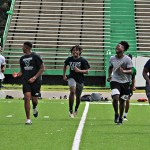 Having two extra weeks of conditioning and light workouts is not necessarily a bad thing, McDaniel and Morgan said, but it also does not replace the time that has already been lost.

“That definitely gives you a few more days to be able to teach your kids the techniques of how to play fundamentally sound football. We can continue to do that on a daily basis, and I think we’ll be fine,” McDaniel said. “These are very smart kids and they’re picking it up. We just need a little tenacity and aggressiveness, that’s all.”

Morgan noted that the first game was not the only thing that was pushed back. The delay means teams also cannot fully practice until mid-August.

“We won’t be allowed to practice until two weeks later, too,” Morgan said. “It’ll still be a lot of making up time that we’ll have to get to. The biggest thing is getting into our fieldhouse and into a routine and some normalcy.”

If there is one thing the Vikings and Gators have learned, is how to deal with a new normal. Guidelines and procedures that seemed onerous a month ago are starting to become second nature as the summer wears on.

At Warren Central’s practice earlier this week, a group ran offensive plays while manager Will Thigpen stood behind them with a bucket full of sanitizer. After each play, he took the ball used, dunked it in the bucket, and toweled it off. A half-dozen footballs sat on the ground next to him as he rotated them in and out.

Over at Vicksburg, McDaniel walked amongst his players with a spray bottle of sanitizing solution to clean the footballs. Another coach shouted, “Distance!” to players during a water break, as a reminder to stay 6 feet apart from each other whenever possible.
Some players at both schools wore masks despite temperatures approaching 90 degrees during the mid-morning hours.

“It’s definitely become a habit. We’re pretty deep into this protocol,” Morgan said. “As coaches, we’re still coaching, but we’re also very conscious of taking care of them and the players are as well. We’re rolling with it as best we can. That’s the good old American spirit. Go in there and get the job done.”