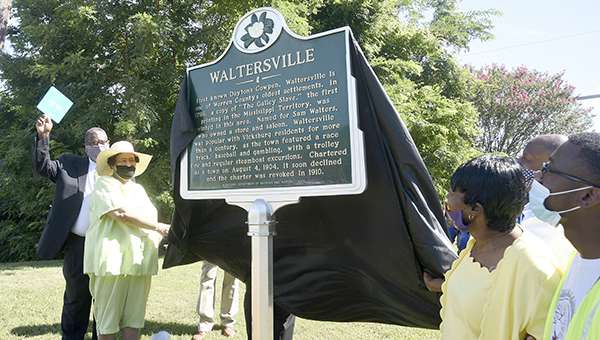 A state historic marker was unveiled Friday in what was once home to the chartered city of Waltersville, now part of the Kings community of Vicksburg. (Courtland Wells/The Vicksburg Post)

“This was a city with a charter,” she said. She pointed to a spot on the ground near the Texaco on North Washington Street. “Bethlehem M.B. Church was right here. We had grocery stores and an ice house.”

The days when Waltersville was a thriving community north of Vicksburg were recalled Friday morning as the state historic marker honoring the area was unveiled near the corner of North Washington Street and Haining Road.

Mayor George Flaggs Jr. said the residents of the Kings and Waltersville communities “are marking their rightful place in history.

“You can’t have a great Vicksburg without a great Kings and a great Waltersville,” he said. “All the progressive things of Vicksburg started in this area, so if we are going to be a complete progressive Vicksburg and a better Vicksburg, we must reclaim and recommit ourselves to what was started here. I hope we leave here with a better understanding that without Kings, without Waltersville, there can be no Vicksburg.”

Believed named for Sam and Kitty Walters, who came to the area in the 1880s from Nova Scotia and opened several businesses, the area was initially known as “Dayton’s Cow Pen,” after a man who farmed and raised cattle during the revolution, said Ezell McDonald, a longtime resident and member of the committee that did the work for the marker.

“Many years before Newitt Vick came to Vicksburg, Waltersville was in the making,” McDonald said.

Waltersville, she said, was granted a state charter in August 1904.

“It was the highlight of this area because it had trolley lines, horse tracks, baseball games, bike races, steamboat trips and more than 5,000 people lived in the area,” McDonald said. “During the years of prosperity, it also had churches, schools, a sawmill and it was Vicksburg’s ‘Coney Island,’ 100 years ago.

“It was bigger than Vicksburg at one point, so be proud of Waltersville,” she told the people attending the ceremony.

“I’m excited, I’m very pleased, I’m humbled that I have been able to see progress in this community in terms of documenting history,” Murphy, a member of the marker committee, said. “Kings and Waltersville, as the mayor indicated, have made significant contributions to Vicksburg. I’m just delighted to be part of the committee that helped capture history as it unfolded years before us and we can preserve the history of these two communities.”

Lula Jones, another longtime resident and a committee member, called the ceremony and marker “a wonderful thing.”

“We remember it when many businesses and many houses were down here,” Jones said. “To see it being remembered as a place that was before Vicksburg. There couldn’t have been a Vicksburg without Waltersville. We are so excited to see it (the marker) happen.”

McDonald, who prepared the application for the marker said seeing it dedicated “feels great. Anytime history is recognized and revealed and honored, I’m thrilled. I’m very happy to see it. If we don’t remember our history, we forget it.”

‘Gold in the Hills’ will continue its historic streak

The Guinness Book of World Records’ longest-running show is not letting the COVID-19 pandemic interfere with its historic run. “Gold... read more