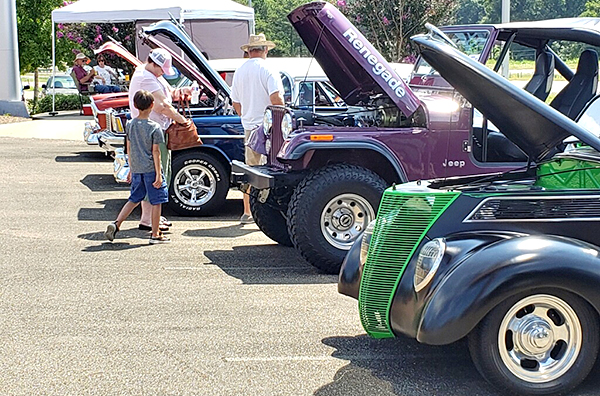 Automotive past, present on display at Vicksburg Cruisers car show

Saturday, on a portion of a paved lot where Dodges, Nissans and Jeeps usually faced Interstate 20, a history of the automobile was on display.

Parker said the club’s relationship with Blackburn Motors went back 14 years when the organization was looking for a site to hold the car show and approached Brother Blackburn about holding it at the dealership.

The relationship has continued with Blackburn’s son, Jeb.

Wooley pointed to a 1968 Chevrolet pickup. “It’s still got the original motor and all equipment.”

He then pointed to another car that seemed more at home on the drag strip than a car show and said, “It was brought in on a trailer; it was too radical to run on the street.”

The show featured several unusual vehicles — Army jeeps, a Dodge Viper, a 2016 Dodge Challenger Hellcat with a 707 horsepower Hemi V-8 — and the most unique of the vehicles on display, a Polaris Slingshot, a three-wheeled vehicle powered by a four-cylinder Chevrolet engine.

“My baby,” owner My Nguyen said, “I bought it two years ago. I’ve been to the show several times. I used to ride a motorcycle. This is the first time for the Slingshot. It’s real fun and fast.”

Nguyen said the vehicle attracts a lot of attention, “especially from kids. Kids love it. When I pulled in, 10-15 kids surrounded it before I could park.”

Two of the Slimgshot’s admirers were Tay Everett and Bill Barbuto.

“We come to the show every year,” said Everett, who had a Chevrolet El Camino pickup and a 1955 Chevrolet Bel Air in the show.

“We like to see what people do to the cars,” said Barbuto, who had a 1955 Chevrolet Nomad Station Wagon in the show.

In another area of the lot, Bruce King was checking the spark plug wires on his 1968 Hemi Plymouth Road Runner. He also brought his blue Plymouth Sport Satellite convertible that won a top prize at the show last year. King said the Road Runner is his current project.

“I refurbished it to make it date correct,” he said as he showed two photos from the car’s drag racing past. “I’m researching the history of the car.”

Proceeds from the show benefited Dr. Dan Edney’s Renewal House program, a Christian sober living home for low-income men that is based on the 12-step recovery principles and includes work placement and financial training programs.

MDOT makes plans to repair I-20 bridges in Vicksburg

The Mississippi Department of Transportation has plans to repair and improve the five bridges on Interstate 20 in Vicksburg. According... read more