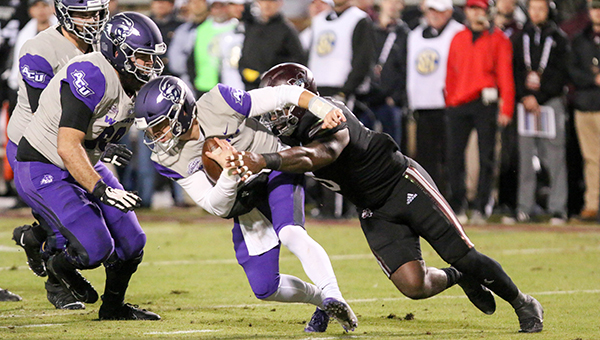 Mississippi State defensive lineman Chauncey Rivers, right, sacks Abilene Christian quarterback Luke Anthony last season. Mississippi State is one of a number of teams scrambling to find opponents for the 2020 season as teams and conferences alter their schedules because of the COVID-19 pandemic. (Walter Frazier/For The Vicksburg Post)

ATLANTA (AP) — Arkansas State’s football opener at Memphis on Sept. 5. was still on the schedule as of Tuesday. That much athletic director Terry Mohajir knows.

Mohajir has no idea who the Red Wolves will play the following week or the week after that.

“I wish I could tell you something concrete,” he said, echoing his counterparts at schools across the country.

The coronavirus pandemic has led to the cancellation or postponement of more than 300 Division I games so far, and how much, if any, college football is played hinges on whether the surging number of virus cases can be tamped down.

Canceled games — even if it’s just one or two — could be crushing financially for athletic programs, especially those at the lower end of the Football Bowl Subdivision and in the Football Championship Subdivision. A team can play a Power Five conference foe on the road and earn as much as $2 million, often enough to keep other programs afloat or fund the training table or academic center.

On Monday, the Southwestern Athletic Conference postponed its season until the spring. Alcorn State will miss out on a $475,000 payday for its season opener at Auburn, and Alabama A&M will not get a six-figure paycheck for playing at Mississippi State in November.

Mississippi State is still scheduled to play New Mexico in its season opener on Sept. 5 in Starkville. New Mexico will be paid $1 million for the game.

The scramble to find someone to play began July 9 when the Big Ten announced it would play only conference games this fall. The Pac-12 followed suit. Decisions by five FCS conferences to not play this fall emptied even more Saturday schedules.

More openings could loom if the Atlantic Coast Conference, Big 12 or Southeastern Conference decide to scrap non-conference games — if football is played at all.

Former ESPN executive Dave Brown, who developed software used by 90 percent of Division I programs to identify possible matchups for nonconference games, said most scheduling right now is being done on a contingency basis because of all the uncertainty.

Brown said he is seeing mostly verbal agreements rather than written contracts, and cancellation clauses in written contracts are taking into account the pandemic and waiving penalties. Perhaps tellingly, there have been no official announcements about replacement games.

Before the SWAC’s decision on Monday to punt football to spring, it was also scrambling. Alcorn State lost a home game against Fort Valley State because the latter’s conference canceled its season.

Jackson State had its season opener on Sept. 5 against Langston canceled, and then went through two opponents for Week 2 on Sept. 12. Its original game against Tennessee State in Memphis was canceled because of COVID-19 concerns. Jackson State quickly filled the date with a home game against Florida A&M, only to have it canceled a few weeks later when the Mid-Eastern Athletic Conference suspended competition.

Jackson State had not yet found a third opponent for Sept. 12 before the SWAC suspended play, but the league’s decision left another team in the lurch. The Tigers were supposed to play at Southern Miss on Sept. 19.

Perhaps no school faces a bigger challenge than BYU, which had five games fall off its schedule: Utah, Michigan State, Arizona State and Minnesota to start the season and a Nov. 28 game against Stanford. BYU is an independent, with no conference schedule.

Schools like Arkansas State, Bowling Green and Portland State of the FCS are among the schools feeling the financial pinch. About 50 FCS vs. FBS “buy” games have been scrapped.

The Red Wolves will miss out on a $1.8 million check for a game at Michigan, and they are also looking to replace a home game against Howard. Mohajir said he has a Plan A, Plan B and Plan C — all depending on what the ACC, Big 12 and SEC decide. Ideally, he said, he will find a game at a Power Five opponent and a home game against an FCS opponent.

With no way to recover the full amount of money lost from the Michigan game, Mohajir said there will be belt tightening. There is no plan to cut sports, he said.

Bowling Green athletic director Bob Moosbrugger already had to cut $2 million from his budget this spring, and he is faced with losing more than that this fall because games at Ohio State and Illinois have been canceled.

Before the pandemic, Bowling Green was projected to net $1.75 million from non-conference games after paying a total of $500,000 for home dates against Robert Morris and Liberty. Those two games are still on. That means the Falcons stand to lose $2.7 million.

Teams in the Mid-American Conference alone stood to lose more than $30 million because of lost guarantees from canceled games against Big Ten opponents.

Portland State could get dinged the most of any FCS program. The Pac-12’s decision to play conference games took Arizona ($550,000) and Oregon State ($400,000) off the Vikings’ schedule.

Athletic director Valerie Cleary’s department already has lost about $500,000 from its NCAA distribution because of the virus and could face a 10 percent reduction in state funding. Losing nearly $1 million in football guarantees is another gut punch to a 15-sport department that operates on just $14.7 million.

Like Arkansas State and Bowling Green, Portland State will seek some level of payment from opponents that canceled on them. Portland State, however, is not actively looking for replacement games, in part because the state of Oregon is early in its reopening and there could be some travel obstacles.

Of course, Cleary said, that could change.

“We’re all getting really good at operating in hypotheticals right now,” she said.

The Southwestern Athletic Conference will not play football in 2020. The league announced Monday that it will postpone competition in... read more