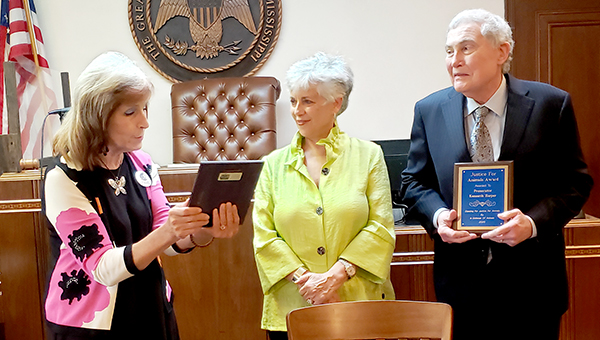 Warren County Judge Marcie Southerland and County Prosecutor Ken Harper were honored Tuesday by In Defense of Animals, an international animal protection organization, for their work in prosecuting a Warren County man for abusing a puppy during a domestic disturbance.

The case involved aggravated animal cruelty charges against Walter Stewart, who injured the puppy during a May 25 argument with a woman by slamming it on the hood of her car. He was found guilty and sentenced to five months in the Warren County Jail.

“I believe wholeheartedly that the people who are helping animals should be honored and there really are some judges and prosecutors in Mississippi who are doing a fine job,” said In Defense of Animals Director Doll Stanley as she presented the two with the Justice for Animals award.

Stanley said many times law enforcement officers are unable to do their job protecting animals because they don’t have the training or the resources to help animals. She said organizations like In Defense of Animals go across the state working with agencies “and we’ve been very successful.”

Turning to Southerland and Harper, Stanley said, “I’m proud of you all and thank you on behalf of the animals.”

“I’m honored to be involved with this,” Harper said. He said he was surprised when he heard he was receiving it.

Southerland said she appreciated Harper’s work on the case, adding, “It starts with law enforcement, it starts with the prosecutors and when it gets to court.

“I could not be more honored to have good law enforcement, good prosecutors and community involvement. It starts with the community,” she said. “We have great folks at the (Vicksburg) animal shelter and the Humane Society. It takes everybody.”

Southerland said research has shown that anyone who would abuse an animal will more than likely abuse a child and an individual.