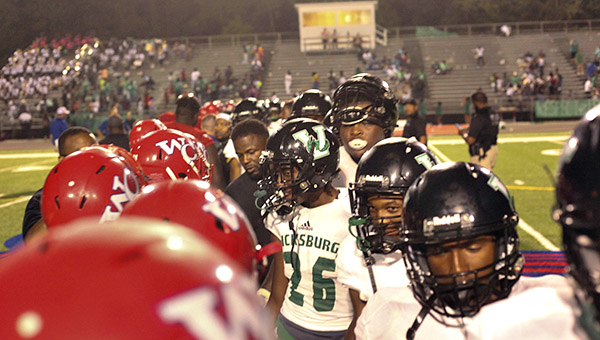 Now, they are two great things that will go great together.

At a special meeting on Thursday, the Red Carpet Bowl organizing committee announced it reached an agreement with the Vicksburg Warren School District to brand the annual rivalry game between Warren County’s two largest high schools as the 2020 Red Carpet Bowl. The game is scheduled for Sept. 4, at Warren Central’s Viking Stadium.

The Red Carpet Bowl had been scheduled as the season opener on Aug. 21, with Vicksburg High facing Madison Central and Warren Central taking on Holmes County Central at Warren Central’s Viking Stadium, but it was among the canceled games.

The MHSAA’s decision put the status of the Red Carpet Bowl in doubt. RCB organizers and Vicksburg Warren School District athletic director Preston Nailor were able to come to an agreement that will essentially rebrand the game for one year.

In normal years, the Red Carpet Bowl sells tickets for the game and keeps that money while paying all four teams to play. This year, the school district will keep the proceeds from ticket sales — if there are any; the MHSAA has not yet said if fans will be allowed to attend games this season. The Red Carpet Bowl will not pay a guarantee to either Vicksburg or Warren Central.

“It’ll be a regular game for us. The only thing is adding the Red Carpet Bowl’s name to it,” Nailor said.

The Red Carpet Bowl has been played every year since 1962, with three exceptions. The 1975 game was canceled for unknown reasons, and the 2018 doubleheader was canceled halfway through the first game because of severe weather.

In the 1980s the Red Carpet Bowl was a postseason game and traditionally played as the first home playoff game for either Warren Central or Vicksburg. In 1986, however, both of those teams went on the road in the first round and lost. No other teams in Mississippi wanted to give up a home playoff game, so the Red Carpet Bowl was canceled that year as well.

This year’s issue was the COVID-19 virus and the chaos it has unleashed upon the sports world. A number of college teams and leagues have already delayed or canceled seasons, as have high school associations in other states.

At a meeting in late June, the Red Carpet Bowl committee discussed several possible options ranging from canceling the game to rescheduling it. The MHSAA’s decision led to a flurry of rescheduling among Mississippi’s high schools teams — many of them had open dates on Sept. 18 that were quickly filled — which Buys said led to the Red Carpet Bowl’s decision to work with the school district to tie itself into the Vicksburg vs. Warren Central game.

Buys and Nailor called it a win-win for both sides. The Red Carpet Bowl is able to continue its tradition as Warren County’s season opener, while the school district maintains a big-money game that it can add another layer of hype to.

“We didn’t want it to die. We think this will be the perfect game for us to do it, especially with it being the first game, construction is going on, new buildings, it’s just a new era for us in time with this pandemic. It gives us something to look forward to,” Nailor said. “It’s big for the community, and now you throw an extra layer on top where you win the county if you win this game. Not only do you brag that you won the Red Carpet Bowl, you get the bragging rights to the county for a full year.”