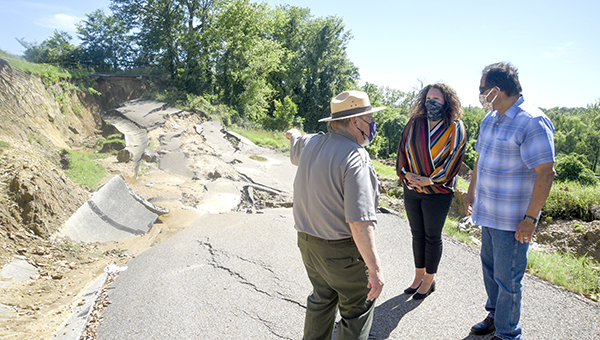 The U.S. Senate passed the Great American Outdoors Act in June by a 73-25 vote and the House on Wednesday passed it by a vote of 310-107. U.S. Rep. Bennie Thompson (D-Miss.) was the only member of Mississippi’s House delegation to vote for the bill.

“Now that this legislation will become law, I will do everything I can to see that Mississippi’s national park sites and conservation priorities are properly recognized and treated fairly,” Hyde-Smith said Thursday.

Speaking at ceremonies dedicating the Mississippi Center for Innovation & Technology on February 22, Hyde-Smith said fixing the erosion-damaged roads at the Vicksburg National Military Park would be her top priority.

“I assure you, we will be all over this to try to get these repairs back where we can live with them,” she said at the time. “While we’re here this is our opportunity to get the things repaired that we have been needing for a long time.”

According to sources familiar with the vote on the bill, Hyde-Smith opposed the Great American Outdoors Act for several reasons, including concerns about the mandatory funding mechanism for the Land and Water Conservation Fund and the collapse of the amendment process to improve the bill.

While she supports the use of revenue derived from energy production on federal lands and waters for a National Parks and Public Land Legacy Restoration Fund, she and other senators like Sen. Bill Cassidy (R-La.) were not given a chance to improve the bill for Gulf Coast states.

They proposed adding provisions from the COASTAL Act to increase the revenue-sharing percentage from 37.5 percent to 50 percent for Gulf Coast energy-producing states like Mississippi, which would have put them on par with inland energy states and given them more funding for coastal resiliency, conservation, and other uses.

The amendment would have lifted a $500 million cap included in the Gulf of Mexico Energy Security Act.

According to a summary by the Congressional Research Service, the bill establishes the National Parks and Public Land Legacy Restoration Fund to support deferred maintenance projects on federal lands.

The fund will receive 50 percent of all unallocated revenue from the development of oil, gas, coal, or alternative or renewable energy on federal lands and waters. The deposits are capped at $1.9 billion for any fiscal year.

While information on how much the Vicksburg National Military Park will receive was unavailable, a June online article on the National Parks Conservation Association website indicated the Park Service will receive $1.3 billion over five years for deferred maintenance projects.

“We’re pretty excited about that (the bill),” said Bess Averett, executive director of Friends of the Vicksburg National Military Park and Campaign. “We have a tremendous amount of projects at the Vicksburg National Military Park that fall into the category of deferred maintenance that would be eligible for some of this funding. Our roads and bridges are one of the main ones, so it’s a great opportunity to see some of those repairs happen faster than they probably would have otherwise.”

McRaven named ‘Creepiest Place in Mississippi’ by The Travel Channel

By Anna Kate Doiron | The Vicksburg Post   The Travel Channel has just confirmed what Vicksburg has known for... read more