McRaven named ‘Creepiest Place in Mississippi’ by The Travel Channel 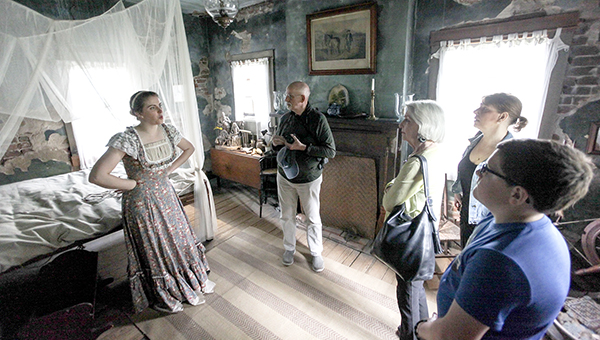 Amanda Guizerix leads a tour group through a tour of McRaven in March 2017. The popular tourist destination in Vicksburg was recently named the creepiest place in Mississippi by The Travel Channel. (Courtland Wells/Vicksburg Post, file photo)

The Travel Channel has just confirmed what Vicksburg has known for generations — McRaven is not only the creepiest place in the city, but the entire state.

The popular tourism destination was named the “Creepiest Place in Mississippi” in a recent online feature by The Travel Channel called “The Creepiest Places in All 50 States.”

“Creepy is what we sell,” McRaven owner Kendra Reed said.

McRaven is nationally known and has been featured in the past by The Travel Channel, National Geographic, 48 Hours, two documentaries, several podcasts and countless local articles. It has previously been named the third most haunted house in America.

Reed and her husband, Steven, purchased McRaven in 2015 and they have loved the creepy feeling the house gives from the very first day they walked in.

The house had been abandoned for seven years. The previous owner, Leyland French, experienced horrifying hauntings. Once, a drawer was closed forcefully with his hands still on it, resulting in two broken thumbs.

“I think that’s probably the scariest thing. McRaven has intelligent ghosts,” Reed said. “They’re ghosts that interact with you.”

Daniel Roach and Sean Lindsey Wright, employees at McRaven, each have had plenty of stories of interactions of their own with the ghosts that haunt the property.

Most of their stories were the work of Mary Elizabeth, a short-term resident of the home in the 1800s, but a long-term memory of those her spirit interacts with.

In fact, a diary containing her personal thoughts is still in her room. Once, when Roach tried to open it, he heard the sound of someone getting off the bed, their feet hitting the floor and footsteps walking toward him.

While Roach has worked at McRaven for more than a year, Wright is relatively new, having joined the staff in March. Wright, though, already has plenty of creepy experiences to share.

“One evening I was in the house by myself, and I was in Mary Elizabeth’s room closing down. This cabinet closed, and when I’m walking out I see this white fog going to the window,” Wright said. “It really did freak me out. I got the chills.”

Reed said she would try to spend the night alone, but does not believe the spirits would allow her to sleep.

Despite their stories being scary enough to cause some employees to run out the door and never return, Roach and Wright share Reed’s passion for the home and appreciate its history.

Reed said each employee must be “certified.”

McRaven was built in three sections, and each section of the house is still furnished true to the time period in which it was built.

The first section was built in 1797, before Mississippi was a state. It is the frontier, or pioneer-style, portion of the house with an upstairs bedroom and a kitchen underneath. Andrew Glass, who was known to rob travelers, was the first owner.

Next, Vicksburg’s namesake Newitt Vick owned McRaven for a short time. Then Sheriff Stephen Howard bought the house in 1836, and the second section was built in an empire style with a second bedroom above a dining room. Mary Elizabeth, his 15-year-old wife, died during childbirth in the new bedroom.

In 1849 it was sold to John Bobb, who built the final section. It has another bedroom set above a parlor room, and an entryway with a grand front porch in a Greek revival style. The porch has since taken on a more Italianate style since its beating during the siege.

McRaven was used as a field hospital during the Civil War. Bobb argued with — and eventually threw a rock at — Union soldiers who were picking flowers out of his yard. Shortly after, Bobb went to the courthouse to inform Gen. Henry W. Slocum of his actions. The apology was accepted, but as Bobb walked home, he was met down the street by a number of Union soldiers who killed him.

Years later, William Murray purchased the house and raised his family there until his death in the house in 1911. His wife and two of their children also died in the house.

Two of Murray’s daughters continued to stay in the home until 1960, when one died and the other moved into a nursing home. The sisters rarely left the home. In their older years they began using some of the furniture as firewood and stayed in the dining room exclusively.

Even into the 1960s, the sisters did not install electricity, indoor plumbing or running water. They used the original kitchen, which is only accessible through an outdoor entry, and the original bathroom, which is detached from the house in the backyard. William and his two daughters who lived there for so many years are also said to roam the halls on occasion.

Brad and Pat Bradway were the first family to make the house a tour home after extensive renovations from where it had fallen into disrepair. The Bradways didn’t live in McRaven, and in 1985 French purchased the home. He lived there but also kept it open to tours.

When the Reeds purchased the home in 2015, they spent months restoring it so others could experience the rich history.

Visitors are welcomed by up to 14 spirits who inhabit the home. For more information on McRaven, including hours of operation and tour times, visit www.mcraventourhome.com or call 601-501-1336.

Anna Kate Doiron is an intern for The Vicksburg Post and Vicksburg Living. Anna Kate is a graduate of St. Aloysius and currently a student at the University of Mississippi.