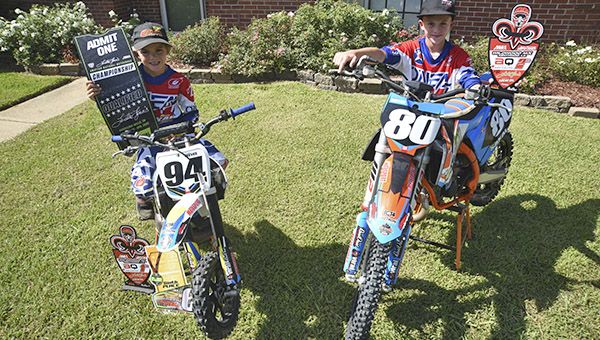 Rudy and Garrett Reeves hold up some of their motocross trophies in front of their Vicksburg home. The two brothers are among the top young riders in the sport in the South. Rudy recently qualified for the Amateur National Motocross Championship in August. (Courtland Wells/The Vicksburg Post)

The bedroom that Rudy and Garrett Reeves share is a shrine to success.

Posters from the motocross events they’ve raced in and won cover the walls. Smaller trophies are stashed away on a top shelf of the closet. Bigger ones — some of them taller than the two brothers themselves — rise up out of the floor.

The two brothers are not done adding to the collection, either. The 7-year-old Rudy and 12-year-old Garrett are just beginning what could be long and fruitful careers in the sport, but are already two of the best dirtbike racers in the South. Rudy was among 40 racers nationwide who qualified for the Amateur National Motocross championship in 2019 and 2020, while Garrett just missed the cut both years.

“It’s fun. I get to meet new people and I like the excitement,” Garrett said. “I like going to new tracks most every weekend.”

Finding his calling
Garrett, the older of the two brothers, started riding dirt bikes when he was only 3 years old. He took to riding like a duck to water, his parents said.

Garrett quickly learned how to ride a motorized bike, and a few years later a trip to an ArenaCross event turned a small hobby into a full-fledged passion. While watching some of the younger riders compete in preliminary races, Tucker said that Garrett remarked that he could beat them. They then signed up for a couple of small local events in March 2017, did well, and have been racing ever since.

Just as quickly as he learned to ride, Garrett learned to race. He started winning races at local tracks, which led to a deeper investment in the sport — better bikes, better equipment, better competition.

The journey has taken him to races in 10 states ranging from Georgia to Nevada. There are plans to race in Minnesota and Washington later this year. 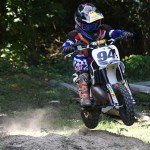 Garrett Reeves rides his dirt bike over a jump on a track in his family’s backyard. (Courtland Wells/The Vicksburg Post)

“When he started taking over all of the weekend warrior races, he needed people to compete against. Next thing you know, we were in Texas every other weekend,” Stephanie Reeves said.

It didn’t take long, either, for motocross to become the official sport of the Reeves family. The younger Rudy got involved as soon as he could ride a bike, and Tucker built a small track behind the family’s home where the boys could practice turns and jumps. On race days, Tucker, Stephanie and their teenage daughter Amanda serve as spotters and the pit crew for the boys.

“I never would have thought that at all, but it brings us together because it takes us all to make it work,” Stephanie said.

The Reeves brothers take two different approaches to racing. Garrett is more laid back, the family says, and is at the age where a professional career is a possibility. Rudy, meanwhile, is more hyper and competitive and living in the moment.

“If Rudy is not first, he cries,” Amanda said with a laugh.

Tucker recalled Rudy dropping out of a race in which he had a slower bike and was not competitive.

“We’ve been at races where Rudy won’t even go get the second-place trophy,” Tucker said.
Garrett and Rudy now train regularly at the Real Deal MX Training Facility in Kentwood, La. The facility is basically a motocross academy, where advanced riders receive coaching and sometimes stay for days or weeks at a time.

Besides learning advanced techniques, the Reeves boys are learning how to maintain their bikes and live on their own, Stephanie said.

“It teaches them responsibility,” she said.

The success has also helped pay some of the racing bills, Stephanie added. Garrett has gained some small sponsorships and joined a racing team, Team Sakai, that provides discounts on equipment and bikes.

“All of that little stuff adds up more than you think it does,” she said.

Injuries happen
Motocross is not the safest sport in the world. Injuries are not just common, they are expected. In the past year alone, Rudy (leg) and Garrett (arm) have each suffered a broken bone that kept them out of action for several weeks.

The latest injury happened just last week. After a training session in Louisiana, Rudy was riding with some friends. He hit a rut in the track, flew over his handlebars, and dislocated his hip. He was wearing protective equipment that prevented more serious injury, but still was airlifted to a hospital in Baton Rouge for treatment.

“He just hit a bad spot in the track and it took him out,” Tucker Reeves said. “They called a chopper because we didn’t know if it was his femur or not, and they were worried about moving him too much. If it was his femur and he got the artery, he could have bled out in a couple of minutes.”

Thankfully, the injury was not as serious as it looked at first. Rudy’s hip popped out of place and right back in, stretching the muscle but not doing any long-term damage. He is expected to miss several weeks of racing, although that is a devastating blow in a different way.

Rudy had qualified for the Amateur National Motocross Championship in Hurricane Mills, Tenn., from Aug. 3-8. The event is the biggest in the country for youth motocross, and Rudy was one of only 40 racers nationwide in his age group (4-6-year-olds) and bike class (50 cc engine size) to qualify. He got the ticket by racing through two different regional qualifying events.

Rudy’s injury, however, might force him to miss it. It will have been about two weeks from the injury to the time of Rudy’s first race at nationals, and doctors have set his recovery time at about four weeks. Tucker said his son is starting to move around again and is eager to race, but they are being careful about rushing him back too soon.

Tucker said they might go and compete, both for the experience and to maintain Rudy’s national ranking, although he admits it’d be hard to throttle down in the heat of an actual race. The format at nationals is one race per day over a three-day span.

“We hadn’t gotten our mind 100 percent made up that we’re going or not going,” Tucker said. “He wants to race. Mom and dad are the ones that are still trying to wait and see. He feels no pain, but it’s not the pain. It’s the muscle.”

Tucker and Stephanie say they’re not oblivious to the danger. Even before a simple backyard ride they make their children put on full protective gear — a helmet, chest protector, boots and uniform. They said they simply take the risks in stride as part of growing up with active children.

“Kids can fall off a trampoline just as easy as a dirt bike,” Stephanie said.

The rewards, the Reeves parents said, are also worth the risks. Being involved in motocross is teaching their children life skills and responsibility, from managing a schedule to maintaining their bikes, and even teamwork in what is ostensibly an individual sport.

“They’re doing so much so fast, and their reaction time is so great. It’s mental and physical. I could turn them loose in a car and they would do better than a lot of people,” Tucker said. “It’s teaching them more than hand-eye coordination like playing ball does.”

Like a lot of kids in the 1980s and 90s, I used to enjoy slipping on some headphones late at... read more