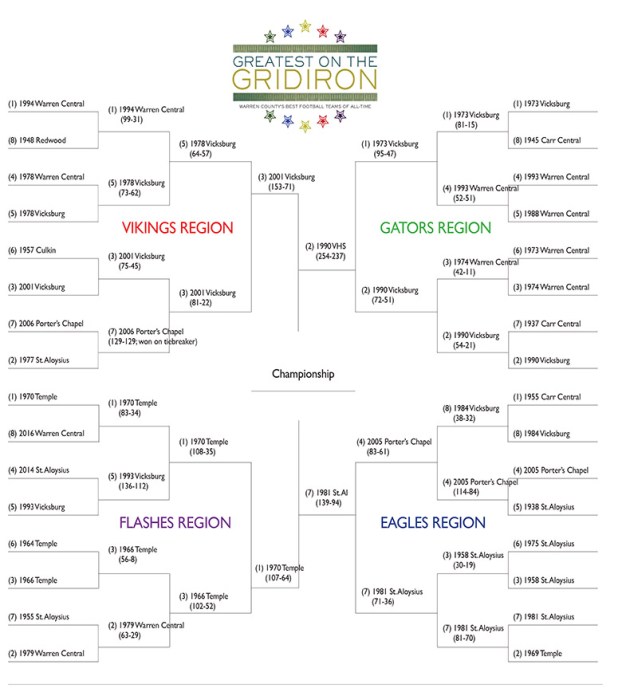 Greatest on the Gridiron finalists span four decades of success

After three weeks, 28 games, and more than 4,100 votes have been cast, The Vicksburg Post’s Greatest on the Gridiron tournament is down to the Final Four.

The 1970 Temple Buccaneers, 1981 St. Aloysius Flashes, and 1990 and 2001 Vicksburg Gators all emerged as champions from their respective regions of the 32-team bracket and will now duke it out for the mantle of Warren County’s best high school football team of all time.

The two Vicksburg High teams will go head-to-head in one semifinal, while 1970 Temple — the only No. 1 seed among the four — will take on 1981 St. Aloysius for the other spot in the championship game.

Voting will begin Saturday at vicksburgpost.com, and you can also vote by clipping out the bracket in today’s paper and returning or mailing it to our office at 1106 Washington St., Vicksburg MS 39180.

A total of 1,119 votes were cast in the quarterfinal round, nearly half of them in a slugfest between 1990 Vicksburg and 1973 Vicksburg. The ’90 Gators prevailed by a count of 254-237, and their showing also gave them the highest cumulative vote total through the first three rounds.

Their semifinal opponent will be the 2001 Vicksburg Gators, who doubled up their 1978 counterparts from VHS 154-73 in the Vikings Region final. The ’01 Gators have had an easy road thus far, winning their first three games by an average of 57 votes, but might need to step up their support in the semifinals. The 254 votes logged by 1990 Vicksburg in the Gators Region final was the highest of any single matchup so far.

In the bottom half of the bracket, 1970 Temple continued to breeze through as it beat 1966 Temple 107-64. The ’70 Buccaneers have totaled 296 votes to this point, third-best among the four remaining teams, but have not had to sweat. Their 43-vote margin of victory in the Flashes Region championship was the closest of their three games so far.

Coming out of the Eagles Region is the Cinderella of the tournament, the 1981 St. Aloysius Flashes. They entered as a No. 7 seed, but knocked off the second-seeded 1969 Temple Buccaneers in round one; No. 3 seed 1958 St. Aloysius in round two; and the No. 4 seed 2005 Porter’s Chapel Eagles in the regional final.

The ’81 Flashes won the latter matchup 139-94 and have seen increasing support as the tournament has gone along.

Which team — and which decade — will emerge as the best? We’re getting close to the finish line, so vote at vicksburgpost.com and make your voice heard.

There will be junior college football in Mississippi this fall. At least, that’s the plan for now. The Mississippi Association... read more