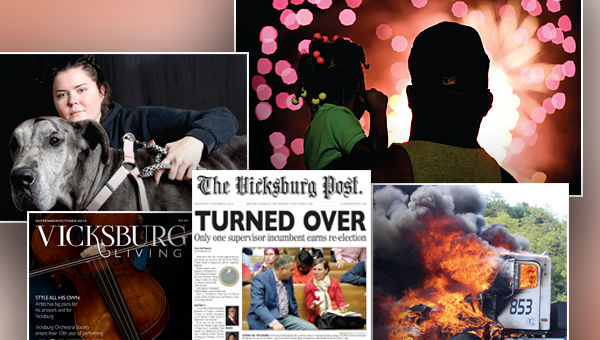 For the first time since 2007, The Vicksburg Post has been named the best metro newspaper in Mississippi.

“I couldn’t be prouder of a news staff that works tirelessly to provide first-rate community journalism to Vicksburg and Warren County,” said Catherine Hadaway, the newspaper’s president and publisher. “We are blessed to have the privilege of telling the stories of this community’s people and institutions.”

Each member of The Post’s staff earned awards in the contest, which featured 1,768 entries from 31 state newspapers in divisions broken down by size and publication frequency. The awards recognize work produced by newspapers and publications during 2019.

In winning General Excellence, The Post beat out The (Columbus) Commercial Dispatch (second place) and The Natchez Democrat (third).

The 2019 Better Newspaper Contest was judged this spring by volunteers from the Alabama Press Association. Thirty-one newspapers submitted a total of 1,768 entries. In the community daily division, The Post staff netted first 10 first-place awards, 10 second-place awards and six third-place honors.

One of the pieces published by The Post that earned a first-place award was the October 2019 story of local first responders spending hours on the river searching for an Arkansas man who had called for help. The story, written by Tim Reeves and John Surratt, won first place for Best Spot News Story.

In April, the staff of The Post combined for extensive coverage of a string of tornadoes that ripped through Vicksburg and Warren County. The coverage earned a first-place honor in Best In-Depth Coverage. In the comments, those judging said the coverage was “far and away the best entry in this category. Thorough, well-written and well-executed.”

The Post earned a first-place award for Best Editorial for a staff editorial written in March 2019 criticizing the former Warren County Board of Supervisors for their lack of unanimous support for the Vicksburg Warren School District’s Leader In Me program.

The staff of The Post also earned a first-place award for Best Design, which judges the entire newspaper’s appearance.

A photograph of Cedric Johnson holding his goddaughter, Miracle Crawley, during the annual fireworks show on the Vicksburg riverfront in July 2019, earned Post photographer Courtland Wells a first-place honor in Best Feature Photograph. It was also among those entries vying for the state’s best photograph of the year.

Paul Ingram, who joins The Post staff at times throughout the year to cover local events, earned a first-place award for Best Sports Action Photograph for an image he captured during a St. Aloysius football game.

Post editor Tim Reeves earned two first-place photography awards. One was for Best Spot News Photo for a picture captured in September 2019 of an 18-wheeler that developed a mechanical issue and caught on fire on U.S. 61 North near Merit Health River Region. The second first-place award was for Best Personality Portrait. That image was of Alexa Jeffers, co-founder of Helping Animals Reach Tomorrow, and Riley, a 2-year-old Great Dane, that Jeffers’ organization was helping recover from gunshot wounds.

Wells picked up a second-place honor for Best Feature Photo for a photo he took of friends taking part in a pick-up football game as the sun set over the park.

The Post’s staff took second for Best Editorial Page or Section and second in Best Special Section for the newspaper’s annual Profile section.

Frazier and Wells combined for a third-place award for Best Lifestyles Page or Section for their continued work on The Post’s weekly Outlook section.

Reeves took two additional third-place awards. The first was for Best General News Story, while the other was for Best In-Depth Investigative Coverage.

“I am thrilled that we can say that each and every one of our staff members earned an award and were part of a newspaper judged among the very best in Mississippi — regardless of size,” Reeves said. “Those who work here do not do so to earn awards but do so to serve the Vicksburg and Warren County community to the very best of their ability. That said, getting this recognition from your peers — being named the best in your division — is a profound accomplishment.”

Elite Performance and Rehab celebrated the opening of its second location in Vicksburg on Friday, July 17, with a ribbon-cutting... read more