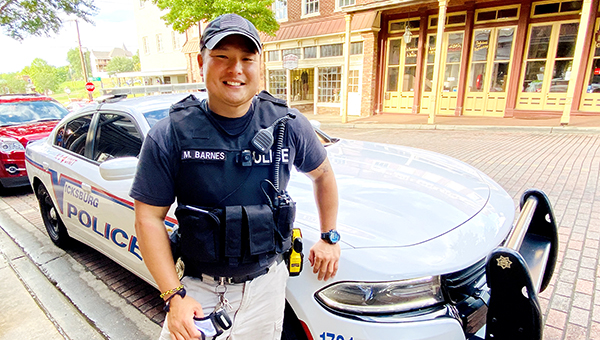 Vicksburg officer, concerned citizens team up to save a woman’s life Friday

The actions of a Vicksburg police officer, along with the help of concerned citizens, Friday afternoon helped save a woman’s life and avoid a serious catastrophe.

Officer Matthew Barnes, along with nearby bystanders, are credited with helping stop a moving car on Cherry Street after the woman driving it had a diabetic emergency and passed out behind the wheel.

The incident occurred about 5:12 p.m. Friday. Vicksburg police Lt. Joe Shows said the 49-year-old woman, who was not identified, was northbound on Cherry Street when the medical emergency rendered her unable to operate her car.

Barnes said the 911 call came in as an erratic driver. He said the car was near the center of the intersection of Cherry and Clay streets when he and other officers arrived.

As a number of bystanders surrounded the car to try and bring it to a stop, Barnes got a hammer from a woman who was helping and shattered the back driver’s side window.

With the window now shattered, Barnes got into the back seat, reached to the front and threw the car into park, bringing the car to a stop in the middle of the busy intersection.

“You could tell she was in a serious condition,” Barnes said, adding that when he got in the vehicle he saw the woman was unconscious and her foot was positioned over the accelerator. “She was sweating profusely and was cold to the touch.”

The woman was examined at the scene by Vicksburg Fire Department paramedics and taken by ambulance to Merit Health River Region. Information on her condition was not made available.

“That’s not something you expect to have to handle,” Barnes said, crediting the good outcome to the selfless help on the part of a number of citizens.