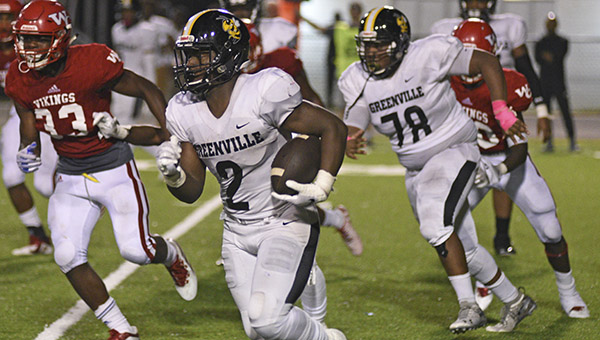 Greenville's Aaron Coats (2) runs against Warren Central last season. The Greenville Public School District announced Tuesday that it is canceling all fall sports, including football for the 2020 season because of the COVID-19 pandemic. (Courtland Wells/The Vicksburg Post)

One of Mississippi’s largest high schools will not be playing football — or any other sports — this fall.

The Greenville Public School District Board of Trustees voted on Tuesday to cancel all of its fall athletic seasons in football, volleyball, cross country and swimming. It is the first school district in Mississippi to take that action as COVID-19 cases rise across the state.

The GPSD also canceled all choir, band and cheerleading activities.

Greenville High School is one of 32 teams in the Mississippi High School Activities Association’s largest classification, Class 6A. It competes in the same region with Warren Central and Clinton in football.

According to the MHSAA rules for the 2020 season, Greenville’s opponents can either opt to find another opponent to fill that date on their schedule or take a forfeit win.

Warren Central coach Josh Morgan said it was too soon to figure out which option he would take, but it will be hard to find a replacement. The Vikings play Greenville on Oct. 2, in the second week of the Region 2-6A schedule, and most other teams in Mississippi will have region games that week as well.

“I don’t really know about it. I’m finding out just like everybody else,” Morgan said. “As far as filling in, it would have to be somebody that wasn’t playing at that time.”

A bigger concern for teams in Region 2-6A, and around Mississippi, is that Greenville might simply be at the front of a trend.

Jackson Public Schools reportedly informed its coaches on Monday that it would cancel all fall sports, but quickly backtracked. On Tuesday, JPS put out a statement saying no decision has been made.

“Jackson Public Schools has made no official decision or announcement regarding athletics and extracurricular activities for the fall semester,” JPS said in its statement. “We want to make our community aware that we are carefully reviewing all potential options and safety guidelines, as well as recommendations from local and state health officials as we consider whether or not to schedule sports, band, and other activities in the fall.”

Jackson Public Schools includes seven high schools that are classified as either Class 4A, 5A or 6A. One of those, Murrah, also plays in Region 2-6A. Two others, Provine and Callaway, are in Region 2-5A with Vicksburg High. If JPS decides not to play football this season, it could reduce the number of teams in Regions 2-5A and 2-6A to as few as six.

The JPS teams primarily play each other in their non-region games.

Vicksburg Warren School District athletic director Preston Nailor said that if it comes to it, having a couple of extra bye weeks in the schedule has some benefits.

“We’re in different times right now, and that’s what everybody has to understand. What this does is it gives us an extra week between games to make sure everybody is healthy,” Nailor said. “There are some downsides. But do you want them to play every week and be exposed to things that they don’t need to be exposed to?”

The Greenville decision will create the latest in a string of alterations to Warren Central’s schedule. The first two games were canceled when the MHSAA delayed the start of the season by two weeks, although WC’s home game with Pearl was rescheduled to Sept. 18. The season opener was pushed back to Sept. 4 against Vicksburg. Now, it appears the Vikings will have an open date in October.

Morgan said the constant adjustments are difficult to deal with, but he’s learned to take them in stride during this unusual offseason.

“There’s so much that’s still unknown. I know the stops and starts and changing plans is hard to plan for. We know everything can change, so we’re going with the plan at this time and if things change again then we’ll adapt,” Morgan said.

Vicksburg High is also dealing with plenty of on-the-fly schedule adjustments. The MHSAA’s delay wiped out games against Madison Central and Velma Jackson. Another contest at Benton (La.) on Sept. 11 was also canceled — it has tentatively been replaced with a neutral-site game against Biloxi — and an open date on Sept. 18 was filled with a road game at Natchez.

The Gators are scheduled to open their Region 2-5A schedule on Sept. 25 at Provine, although it appears that game could be in jeopardy as well if JPS does indeed cancel its football season.

In addition to those changes, Vicksburg will have to play its home games this season across town at Warren Central because of construction at its home stadium. One of those, on Oct. 22 against Canton, will be played on Thursday because Warren Central is also at home that week. The only other schedule conflict is on Sept. 11.

“This whole year is about adjustments, so we’re going so we’re going to adjust to anything that’s thrown at us,” McDaniel said last week. “It really doesn’t matter. We’ll play in the middle of (Interstate) 20. We just want to get to a playing date at his point.”