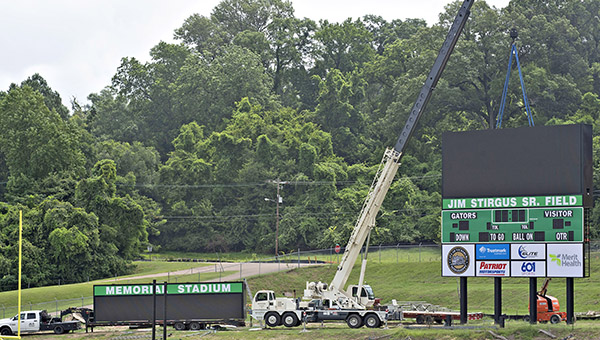 Normally, grabbing a facemask during a football game is a penalty. This season, it will be encouraged.

Fans and stadium personnel could be required to wear masks at all high schools football games — as well as at volleyball, cross country and swimming events — according to guidelines issued this week by the Mississippi High School Activities Association.

The MHSAA’s “no mask, no entry” edict is a strong recommendation and not statewide policy. Each school district and municipality is still free to come up with its own rules, although most will follow the recommendations of the state association.

“We’re trying our best to filter through all of the information and make the best decisions,” Vicksburg Warren School District athletic director Preston Nailor said. “Pretty much everything we have received has been a recommendation, and it’s left up to the individual districts to decide what to do.”

Nailor said a series of meetings are scheduled over the next week with local officials and those at other schools to hammer out a cohesive policy.

“Everything should be finalized by next week, except for the number of spectators,” Nailor said.

Not mentioned among the more than two dozen updated guidelines for football was whether fans will be allowed to attend or not. The final bullet point on the MHSAA’s lengthy list read, “Attendance policy and quarantine procedure will be determined before team competition begins and at the appropriate time.”

The MHSAA’s football season is scheduled to begin on Sept. 4. Final guidance on fan attendance will likely come from state and local governments, and could shift right up until the last minute.

So far, most sports venues in Mississippi have been limited to 25 or 50 percent capacity, when fans are allowed at all. Warren Central’s Viking Stadium — where both Warren Central and Vicksburg will play home games this season — will have a listed capacity of about 6,000 people once the current phase of renovations are complete.

Nailor said the VWSD will use technology to both help keep fans safe and allow them to see games if they don’t want to attend. All football games involving Vicksburg and Warren Central are broadcast online through the NFHS Network. There is a fee to watch games on the service.

“Whatever that magic number is, we’re still going to do our best to offer livestream services,” Nailor said. “Five years ago, we started down this road. It’s helped us now so we know what we can and can’t do, and we can provide the maximum value to our consumers and fans.”

In 2018, the VWSD also started offering a digital ticketing option through GoFan.co. The MHSAA recommended increased use of the service to reduce the risk of COVID-19 transmission through hand-to-hand contact. Many college football programs, including Mississippi State, Ole Miss and LSU, have announced they will only use digital tickets this season.

Nailor said an added benefit of the service is that it allows the school district to monitor the exact number of tickets sold and better manage the limited seating capacity.

“It allows us to dictate how many tickets we can sell. If they tell us we can only sell 2,000 tickets, then we can cut it off when we sell our max,” Nailor said.

The facemask requirement was one of a number of recommendations from the MHSAA and National Federation of High Schools as the first season of the COVID-19 era nears. Some of the guidelines could radically alter the traditional game day experience for high school football.

On-duty personnel such as concession stand workers would be required to wear gloves and be screened for COVID-19 symptoms upon arrival. Signs reminding people to follow social distancing guidelines must also be posted.

Dressing rooms must be sanitized before and after games, and “should be large enough to social distance” according to the MHSAA.

Other rules are some that players and coaches have been following since returning to practice in June, such as not sharing water bottles and towels, and avoiding handshakes and high fives.
Nailor said that, if fans are allowed to attend games, concession stand favorites such as boiled peanuts and hot dogs might be a thing of the past.

“The conversations we’ve had have been on having concessions, but limiting it to pre-packaged things like candy. Things you don’t have to have people working on and possibly expose others to the virus,” Nailor said.

Bands and cheerleaders will be allowed to perform at football games, but have their own guidelines to follow. Individual school districts will determine whether bands travel for road games, and only one band will be allowed on the field at a time.

Cheer and dance teams must get an administrator’s approval to perform stunts, and must observe proper social distancing on the sidelines.

“(VWSD bands are) scheduled to perform at home, but we don’t know what that performance will look like because there’s no competition season this year. Most of the band’s performance on the field is based off of their competition routines,” Nailor said.