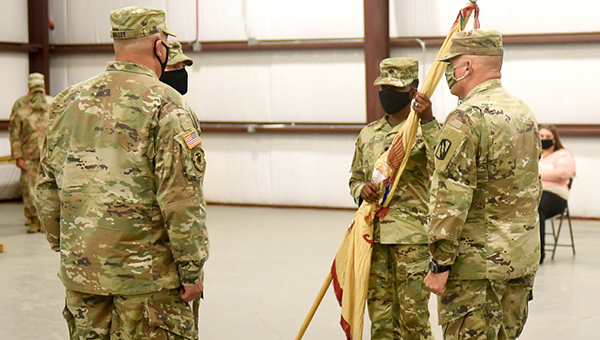 Lt. Col. Annie Lee of Hattiesburg assumed command of the 106th Brigade Support Battalion, headquartered in Hattiesburg, from Lt. Col. William Walley of Brandon, during the Change of Command ceremony on Friday at Camp Shelby. The 106th BSB is one of seven battalions that make up the 155th Armored Brigade Combat Team, headquartered in Tupelo.

“I am honored and privileged that the command team here in Mississippi chose me to command the 106th Brigade Support Battalion,” Lee said. “I know I have some big shoes to fill, but I am up to the challenge.”

The Hattiesburg-based unit has approximately 400 soldiers and provides logistics, maintenance and medical support for nearly 4,000 Soldiers in the 155th ABCT.

“Lt. Col. Lee is poised to take this great organization to the next level,” said Col. Jason Nelson, 155th ABCT commander. “I have supreme confidence in her abilities and I know she will be successful.”

Lee becomes the first female battalion commander in the 155th ABCT since the brigade’s inception nearly 70 years ago. She has served in the Mississippi National Guard for 30 years, 13 of which she spent enlisted before earning her commission as an officer in 2003.

“I am excited and honored to be the first female to command the 106th BSB here in the state of Mississippi,” Lee said.

“It was an honor and a privilege to command a great organization such as the 106th BSB. The soldiers are committed to mission accomplishment as evident in the unit’s success during our recent deployment to Kuwait during Operation Spartan Shield,” Walley said. “I want to say thank you to the soldiers for their support and I look forward to their future success at NTC (National Training Center) in 2021 and beyond.”

The 155th Armored Brigade Combat Team is the largest unit in the Mississippi National Guard with approximately 4,000 soldiers (including Kansas’ 2-137th Infantry Regiment). The brigade’s 1st Battalion, 155th Infantry Regiment is the sixth oldest infantry regiment in the U.S. Army known as the “Mississippi Rifles.”

How many times in history do you get the chance to design a state flag? Not many. But, here’s your... read more