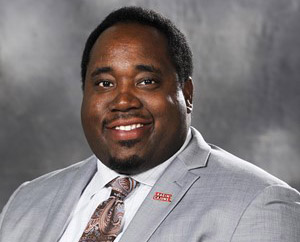 Looney, who was 31, was entering his third season on the Ragin’ Cajuns staff and coached the offensive line, a position he played for Mississippi State from 2007 to 2010. He also began his coaching career with the Bulldogs as a graduate assistant under Dan Mullen in 2011.

Looney, who grew up in Birmingham, Alabama, was offensive line coach and recruiting coordinator at East Mississippi Community College in 2012 and 2013, and spent the next two seasons as an assistant at Central Arkansas.

He served as a graduate assistant at Georgia under head coach Kirby Smart in 2016 and then coached tight ends at Mississippi State in 2017 before joining the Ragin’ Cajuns the following season.

Looney earned his degree from Mississippi State in arts and sciences in 2010. He served three years as an SEC Student Advisory Council Representative. After serving as vice president of MSU’s Campus Student Advisory Council in 2008, he was elevated to the president’s position the following year. Looney was also a three-year member of the NCAA Football Issues Committee.

“The entire Mississippi State Family is deeply saddened and heartbroken by the loss of one of our very own in D.J. Looney,” Mississippi State director of athletics John Cohen said in a statement. “D.J. was an outstanding student-athlete and coach and an even better person. He had such a positive personality, attitude and always a smile on his face. D.J. will be remembered and missed by all who knew and loved him. Our thoughts and prayers are with D.J., his family, his friends, his former teammates, the University of Louisiana at Lafayette, and Mississippi State.”