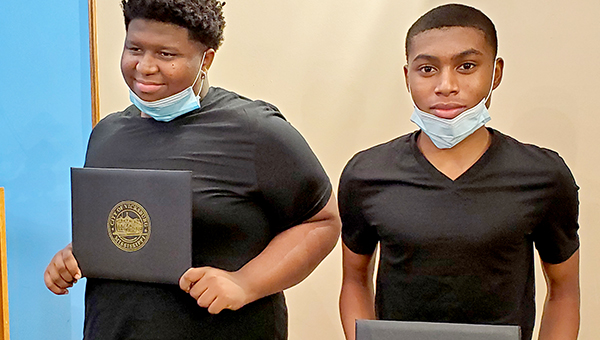 Tywon Lloyd, left, and Duane Williams were honored by the Board of Mayor and Aldermen for returning lawyer Mack Varner's wallet. (John Surratt/The Vicksburg Post)

If the Greek philosopher Diogenes was still looking for an honest man he would have stopped at Duane Williams and Tywon Lloyd.

The two young men were honored at Monday’s meeting of the Board of Mayor and Aldermen for finding and returning Vicksburg lawyer Mack Varner’s wallet that he lost in the area of Mission 66.

“Isn’t it wonderful,” Varner said. “I called and told (Mayor) George (Flaggs) about it, and he said, ‘I’d like to commend them.’”

Flaggs presented the young men with proclamations and a reward of $50 each from his pocket.

For the story of the missing wallet and its return, rewind back to some time on the afternoon of July 28.

Varner said he had been in Jackson on business. He returned to his office, went home for lunch, and discovered he had lost his wallet.

“I had no idea what I had done with it,” he said. “I had three, four credit cards, driver’s license, about $500 and a lot of valuable information. I looked all over my house, all over my office, all over my car; I had given up.”

On July 29, Varner was in Jackson for a memorial service when he got a call from his office that Williams and Lloyd returned the wallet. When he asked if there was anything in the wallet, he was told, “Yep, you did have $500 in your wallet, now you have $300 because we tipped them both real good.”

Varner got the boys’ names and phone numbers and later called them.

Williams said his grandmother, Juanita Dunn, found the wallet on Mission 66 and made her way through traffic to get it. Dunn was going out of town, so she gave it to her grandson to return it. Williams found one of Varner’s business cards, got the address of his office and took the wallet there.

“I want to commend them for their honesty and integrity,” Varner said.

Flaggs did as well.

“I was told about these two phenomenal young men,” Flaggs said. “I get so sick and tired about everything I see on the news that’s negative when it comes to young black boys in the city of Vicksburg and around this state, and I want you to be able to witness what two young black boys did in this city.”