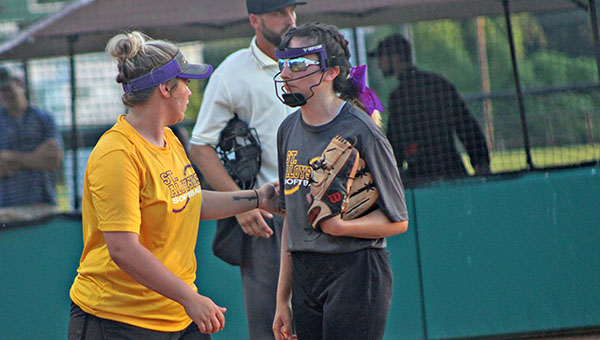 NATCHEZ — The St. Aloysius Lady Flashes lost 12-0 to Cathedral Monday in Natchez. The result wasn’t as important, though, as the simple act of playing.

The Lady Flashes played their first game of the 2020 MAIS softball season. With so much uncertainty related to COVID-19, sports, and whether the school year will start on time or be delayed, coach Savannah Buck said she was excited to be back on the field.

“It feels so great to be back on the field,” said Buck, who is entering her second season as St. Al’s coach. “I was nervous at first. I didn’t think they were going to push our season through, but we prayed and prayed and when we got the go ahead, we couldn’t have been more excited. It is a little different having to space out in the dugouts and no high fives after the games. But the game is still the game and we couldn’t be happier to just be out there.”

St. Al’s next game is at the Bobcat Classic on Saturday. It will play its home opener Aug. 10 at 5 p.m. against Simpson Academy, at Sports Force Parks.

Buck said the Lady Flashes are going to work on in-game situations and hitting to try and improve on Monday’s performance. St. Al’s batters struck out five times, and Ali Grace Luke singled in the fourth inning for the team’s only hit.

Madison Waters was on the mound for the Lady Flashes. She struck out three and gave up 11 hits.

Anna Poole earned the shutout victory for Cathedral and pitched a complete game. She gave up one hit and struck out five batters.

Cathedral’s Kinslee Young went a perfect 3-for-3 at the plate, hit two triples and had four RBIs. One of her RBIs came in the second inning, one in the third and two to finish the game in the fourth via the mercy rule.

“I thought we swung the bats well tonight,” Cathedral coach Craig Beesley said. “That is encouraging for me because I thought that was going to be one of our points we were going to struggle. I thought Poole did a great job on the mound again and our defense played well.”

Cathedral (1-1) will play at 6:15 p.m. Thursday in Vicksburg, against Porter’s Chapel Academy. The game will be at Sports Force Parks.

Finally! The Rock purchases remnants of the XFL

LOS ANGELES — Finally, The Rock has come back to the world of professional football. Dwayne Johnson, the World Wrestling... read more