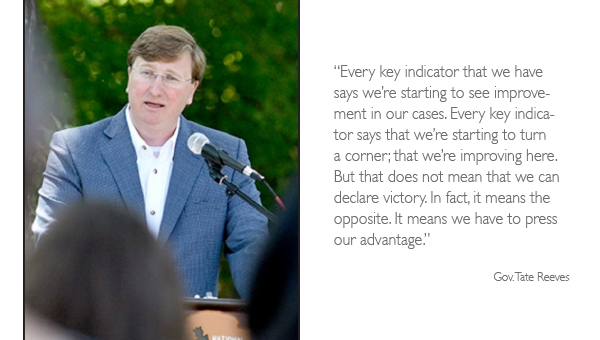 Gov. Tate Reeves Tuesday issued statewide orders requiring people to wear facemasks in public and adults and students to wear masks in the schools unless there is a medical reason preventing them from doing it.

Reeves also ordered delayed the start of school for grades 7-12 in the counties of Bolivar, Coahoma, Forrest, George, Hinds, Panola, Sunflower and Washington, which have more than 200 cases and 500 cases per 100,000 residents.

“We must pump the brakes in the hardest-hit areas,” he said.

He earlier set a mask order in 38 of the 82 counties, saying he thinks a targeted order has been effective.

In announcing the mask order, Reeves said the people of Mississippi needed to come together to fight the virus. He said the mask order requires people to wear masks at public gatherings and retail environments.

“Wearing a mask — as irritating as it can be, and I promise you I hate it more than anyone watching today — is critical,” he said. “If you wear a mask, if you socially distance, do the little things, it will make a difference.”

Under the reopening plan, facemasks are required for bus drivers and students riding the buses. Superintendent of Schools Chad Shealy said at the meeting masks would not be required for students or teachers in the schools “but will be strongly encouraged.”

He also said the students will receive five cloth masks — one per day — that can be washed and reused. Teachers and school employees will receive masks and face shields.

Mayor George Flaggs Jr. said Reeves’ order is not more restrictive than the regulations the city already has in place.

The Board of Mayor and Aldermen in July amended its emergency order to require facemasks in all public buildings and retail stores, and stopped alcohol sales after midnight.

“I think we’re more restrictive,” Flaggs said. “Let’s continue to adhere to the civil emergency order currently in effect, which includes wearing masks and practicing social distancing. This virus is serious and it will take all of us doing our part to minimize the spread and protect the safety and well-being of everyone.”

Flaggs said the local numbers on the disease are beginning to reflect the decisions of the Board of Mayor and Aldermen.

“I’m pleased where we are and where we’re headed out,” he said. “It’s a day by day thing.”

Rosa A. Temple improvements expected to be complete by Friday