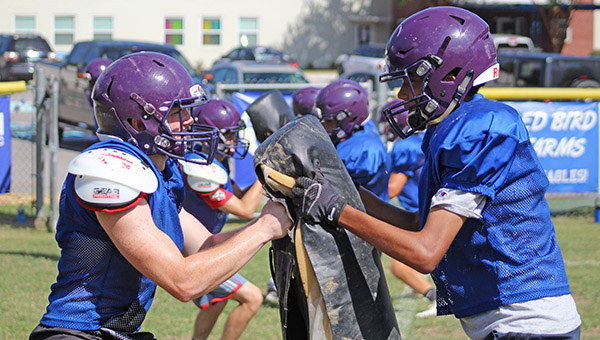 The most important games of the high school football season — and perhaps in the history of the sport — will be played this Friday night on fields all across Mississippi.

And they won’t even count.

Teams in the Mid-South Association of Independent Schools, including St. Aloysius and Porter’s Chapel Academy, will gather for preseason scrimmage games. It will mark the first time they have been able to break out of their isolated practice bubbles and play full-contact sports in the state since the COVID-19 pandemic began in March.

In addition to evaluating their football teams, coaches and schools will try to figure out the best ways to handle crowds and keep both fans and players safe from the virus. It will also give them the first glimpse into how to practice new game day procedures put in place because of the pandemic.

“It’s helped that these baseball tournaments have kicked off. We’re not the first thing to happen since March. Sports are starting to open back up,” said Blake Purvis, Porter’s Chapel’s football head coach and athletic director. “However, we’re going to be some of the first to play full contact football against another school in the nation. There’s definitely going to be some eyes on us seeing how it goes.”

PCA will host two teams, Tensas Academy and Glenbrook Academy, Friday at 5 p.m. St. Aloysius will go on the road to play Brookhaven Academy at 6:30. The format for all of the games will be controlled scrimmages, where each team runs 30 or 40 offensive plays and there is no game clock.

Although the games are glorified practices, the stakes and pressure are as high as can be. If there are no major COVID-19 outbreaks following the scrimmages, it would be a big step toward showing that it is safe to play contact sports. If, however, there is a wave of cases among teams next week, it might sink the entire sport for the 2020 season.

“With this issue, it’s not really a trial run. Even at a scrimmage, you’ve got to get it right. There may not be a next time if you don’t get it right this time,” Purvis said.

The MAIS is proceeding with its plan to begin the season over the next two weeks. PCA plays its regular-season opener on Aug. 14 at Benton Academy, while St. Al opens at Hartfield Academy on Aug. 21.

The Mississippi High School Activities Association delayed the start of its season by two weeks, to Sept. 4. Its preseason scrimmages are scheduled for Aug. 28. Vicksburg Warren School District athletic director Preston Nailor said he and his colleagues around the state are closely watching the first few weeks of the MAIS season to see what works and what doesn’t.

“I’m definitely keeping up with the MAIS. If good practices are working for somebody, we’re going to take that down and use it,” Nailor said.

Purvis said he will be watching as well. PCA’s first two regular-season games are on the road, which will allow him to observe other schools and take notes. The scrimmage, meanwhile, will provide an opportunity to walk through new procedures with a small crowd.

“It’s a chance for us to deal with a smaller capacity, with it being a scrimmage,” Purvis said. “Make sure we have the personnel. Then we get to go see how other people handle it and follow along. That is a huge benefit for us.”

Nailor, Purvis and St. Al coach Stacy Sizemore all said athletic directors, coaches and administrators around the state and country have been sharing ideas on how to handle game day operations.

“I think the schools, administrators, school districts, principals and for us the archdiocese have been leaders in their area and thinking about having kids’ best interests at heart. Everybody is on the same pages, which is awesome,” Sizemore said. “Someone in their area is stepping up and saying this is what we’re going to do, and the coaches are taking that directive and doing the very best we can possibly do because at the end of the day we want to play football. I don’t think there’s a coach in America that will not do what is in the best interests of the kids.”

Besides seeing how their teams perform, Friday’s scrimmages will offer a chance to iron out a number of new game day procedures. Everything from travel to letting fans through the gate has changed in the age of COVID.

Fans, when they are allowed in at all, could have to pass temperature checks at the gate and wear facemasks. Once inside, they will likely be encouraged to socially distance themselves in the stands. Some schools are even increasing the use of digital tickets to reduce the risk of spreading the virus.

If fans are allowed at PCA on Friday, Purvis said there will not be a concession stand. That will help school officials focus on crowd control.

On the field, footballs will be swapped out and sanitized between each play. Players will have more room to spread out on the sideline rather than cluster together. Some might wear cloth facemasks under their football facemasks. The communal water cooler will be replaced with personalized bottles. All players will undergo temperature checks before the game.

Although the experience of attending and watching a football game will look different to fans, for players and coaches it has become the new normal. A lot of the procedures are ones they have been practicing for two months during summer workouts, and have become as much a part of the rhythm of the game as huddling up to call a play.

That, Sizemore said, will help everyone flip a switch and enjoy a few hours of normalcy once the game begins.

“Once that ball is kicked off, I think everybody’s mindset is going to go back to the way it was — coaching and teaching our kids,” Sizemore said. “You hope that you’ve expressed to your kids enough through this whole process of social distance, and keeping your hands clean, and keeping the balls clean. Coaches will adapt to it just like they have, because they want to play football and they want their kids to play football, so we’re going to do whatever we have to do to be able to play.”

WC softball tryouts Tryouts for Warren Central’s fast-pitch softball team will be held Aug. 11 and 13, from 4:30 to... read more