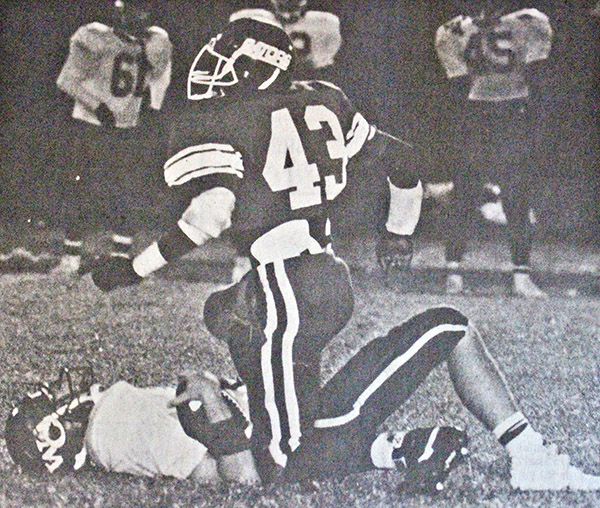 In the 1990 MHSAA Class 5A playoffs, Vicksburg High saw its magical season end because of a blocked field goal and PAT in the fourth quarter of a one-point loss.

Thirty years later, the Gators found their finishing kick and went all the way to a championship.

The 1990 Vicksburg Gators emerged from among 32 all-time greats to take the title of Warren County’s best high school football team ever in The Vicksburg Post’s Greatest on the Gridiron tournament.

The Post’s readers determined the winner of each game in the bracket-style tournament through online polls. The 1990 Gators beat the 1970 Temple Buccaneers 375-372 in the championship game, thanks to a late charge from their supporters.

On the final day of voting, Vicksburg received 125 votes to Temple’s 67. Fifty-one of the votes for Vicksburg came in the final hour that the polls were open.

“A lot of those guys were our coaches. We had talked to each other and said if we were going to lose to anybody, we were OK losing to (Temple),” said Alfred Daniel, a junior running back on the 1990 Vicksburg team. “But this is a chance to have our story told. Everybody knows their story. Nobody knows our story.”

The 1990 Gators were one of the best teams from a strong era of Vicksburg High football. The program had nine consecutive winning seasons from 1986-94, and the 1990 season was one of three in that span in which the team won 10 or more games.

The 1990 Gators finished 10-3, with the last loss a 21-20 defeat to Tupelo in the Class 5A semifinals. Vicksburg defeated Warren Central for the first time, as well as No. 1 Starkville in the playoffs.

The defense, led by Vicksburg Post Player of the Year Ronnie Taylor, had 21 interceptions — Malcolm Williams led the team with five — and 39 takeaways.

Taylor and Daniel, meanwhile, were part of a powerful and deep running game. Kenny Watts led the Gators with only 451 yards, but five backs finished with at least 245. Seven players scored at least three touchdowns apiece. Quarterback Kevin Ferguson, a first-time starter as a senior, threw nine touchdown passes.

“We were a great team because that senior class did something that had never been done in that program — they found a way to be leaders. Whatever role we took upon us, you were going to do it collectively to win a championship. There were some big-name players, but it was a collective effort. Everybody played their role when they needed to,” Daniel said. “We had coaches on that team that could give us a vision of what it should look like. It was an unbelievable time.”

PCA can’t keep up with Cathedral

Porter’s Chapel Academy hung with Cathedral on Thursday night, but couldn’t quite keep pace in a softball slugfest at Sports... read more