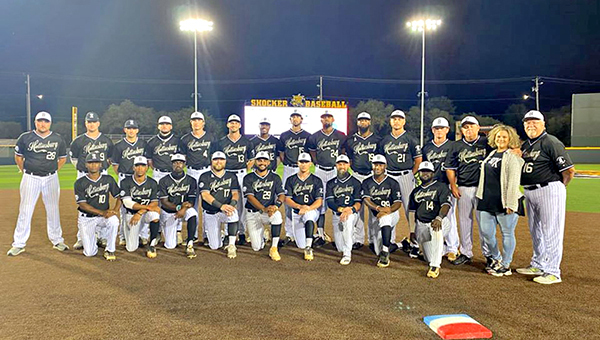 The Hattiesburg Black Sox pose for a team photo after their 5-4 loss to the Hutchinson Monarchs in the National Baseball Congress World Series on Thursday. The Black Sox are an amateur team from Central Mississippi whose roster includes a number of players from Warren County, Port Gibson and Hinds Community College. (Courtest of the Hattiesburg Black Sox)

Black Sox bow out of World Series with loss

A late rally wasn’t enough to prevent the Hattiesburg Black Sox from making an early exit at the National Baseball Congress World Series.

The Hutchinson (Kansas) Monarchs scored four runs in the fifth inning, and then held off a late charge by the Black Sox to win 5-4 in an elimination game Thursday night, and send the Mississippi team home.

The Black Sox, an amateur team comprised of former college and pro players from Central Mississippi — including several from in and around Warren County — finished 1-2 in the double-elimination tournament to crown the amateur baseball national championship. Both of their losses were by one run.

Hutchinson advanced to play another elimination game Friday night against the Hays (Kansas) Larks. The winner still must win two more elimination games this weekend to reach the championship round on Monday.

On Thursday, Hutchinson scored one run in the fourth inning and then four more in the fifth to take a 5-0 lead. Jack Sigrist hit a two-run double and Tanner White a two-run home run.

The Black Sox got a run back in the sixth on an RBI single by Jaylyn Williams, and then cut it to 5-4 with three runs in the eighth as Pablo Lanzarote and Walker Burchfield hit back-to-back home runs. Lanzarote’s homer, his third in three games, was a two-run shot.

The Black Sox weren’t able to keep the rally going, though. The next two batters struck out to end the inning. In the top of the ninth, the Black Sox got the tying run on base via an error, but Trey Jones flied out to center field to end the game.

Lanzarote finished the game 1-for-4 with two RBIs and two runs scored for the Black Sox, and Williams was 3-for-4 with an RBI. Burchfield had two hits.