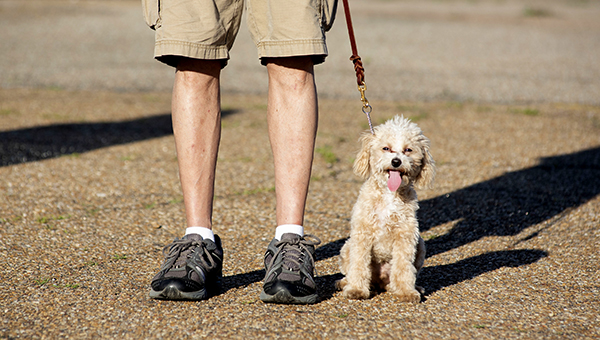 A dog and its owner stand still during a recent training session conducted by Vicksburg Dog Obedience. (Courtland Wells/Vicksburg Living)

Sarah, Henry, Coco, Chloe and a few of their new friends greeted each other in the parking lot while waiting for class to begin. They milled around and chatted. A few got a little more personal and sniffed each other, which they didn’t seem to mind even if the people watching them did.

The four dogs were among a dozen who showed up for obedience school. Karley Hayes and Lindsey Jordan, owners of the appropriately-named Vicksburg Dog Obedience, will spend eight weeks teaching these good boys and girls to become even better boys and girls — and their humans how to be good owners.

“We’re here to help you train your dog. We’re training you, also. We want you to be able to control your dog and have a happy life with your dog,” Hayes said. “We’re hands on. We’re showing them how to hold their leash and their chain, and what they’re doing wrong and what’s going to give them a better outcome with their dog. If they sent their dog to us and never did anything with them, then their dog would go back to the same tendencies.”

Vicksburg Dog Obedience was started by Hayes’ grandmother, Betty Smith. Jordan was one of Smith’s teachers and eventually took over the business. Jordan has been training dogs for 16 years, and Hayes joined up eight years ago.

The business is a side hustle for both of them — Jordan teaches at Warren Central High School and Hayes is a hairstylist — but also indulges a lifelong passion for caring for animals. Years of life experience more than make up for a lack of formal veterinary training.

“I think we’re both animal people. We just love animals. We both have horses and all kinds of animals,” Hayes said. “My grandmother always did it. I’d go to her house and pull out all kinds of books any time something was going on with an animal and she’d help me. Then she would get me to come and watch her class, and I’d put my dogs through her class. I brought my dog and was in Lindsey’s class.”

Jordan said she took a dog to Smith’s classes, and apparently showed a knack for handling animals. Smith recruited her to help with the classes and has been doing it ever since.

“When I became an adult and got my own dog, I didn’t want it to end up like some of the terrible dogs we had when I was growing up. We had to put to sleep a dog that became aggressive toward people and children especially,” Jordan said. “When I got my own dog I was determined that I was going to learn about it so I didn’t end up with the same problems. I guess her grandmother thought I could handle teaching and asked if I’d be interested in teaching, and it kind of went from there.”

Vicksburg Dog Obedience operates largely by word of mouth. Jordan and Hayes have a good working relationship with a number of veterinarians around Vicksburg who refer people to them. A Facebook page and satisfied customers also generate plenty of referrals and even repeat business.

“They trained our other dog, Rio. So it’s our second time around,” said Yolanda Eslinger, who along with her son Jose was attending the class with a 6-month old lab/retriever mix named Coco. “My other dog did not pass. But she did the basic things we needed her to do. So I highly recommend it. They’re fantastic.”

The classes meet once per week, for eight weeks, on Monday evenings in the parking lot of Tractor Supply Co. on South Frontage Road. The cost is $150, and includes a leash and collar. Hayes and Jordan teach one session in the spring and another in September. Most of the dogs in the classes are young, around one year old, but all ages are welcome.

Hayes and Jordan thanked the local vets and Tractor Supply Co. for helping them. In addition to hosting the classes in the parking lot, one of the final exams is for the dogs to behave themselves on a trip inside the store.

“Tractor Supply has been great to us. They’re very supportive to us,” Hayes said. “The vets let us leave business cards out, all the vets are familiar with us, and they’ve been very supportive too, so we’re really thankful for that.”

Classes usually have about a dozen dogs and owners, with Hayes and Jordan each taking half the group. The smaller classes allow them to better control the dogs, as well as provide personal attention when needed.

“They’re really patient,” Eslinger said. “I don’t feel like any one person gets more attention. They really do such a good job whether the dogs are really quick or like this one that are young and still have a lot to learn. They’re very patient.”

“He had to stay after class. She stayed and worked with him a little bit more, and they taught us some different things. Mostly to sit and heel. They gave us some different tips on feeding and doing different commands. She would one-on-one if you were having trouble,” Cresswell said. “They seemed like they had a lot of knowledge and knew what they were doing. I’m excited to learn.”

Hayes and Jordan try to teach the dogs one new skill per week, such as sitting or staying. Owners are given “homework” to take home, which is necessary to reinforce the lesson so it is not quickly forgotten.

“We learn more than the dogs do,” said Joelyn James, who was at the class with her 8-month-old ozzydoodle Sarah. “It’s teaching us. We teach the dogs, but it’s really teaching us how to manage them.”

Jordan affirmed that the goal of the classes is to not only teach the dogs how to behave, but their human owners how to handle them. That, Jordan said, will hopefully build a lasting bond and prevent people from giving up on unruly pups.

“One of the biggest things is, if we can help people train their dogs so they’re not behavior problems the hope is that it helps keep them out of shelters and being abandoned,” Jordan said. “Basically, where they don’t terrorize your life. You want to enjoy your pets, and you can’t enjoy them if they’re jumping all over you and biting your hands and ripping your clothes and chewing up your shoes.”

Hayes said the work is rewarding. Seeing the transformation from a jittery puppy to a well-behaved dog over the course of two months, and both dog and owner gain confidence, makes it all worth it.

“We meet a lot of great people and a lot of great dogs. Seeing the dogs transform is crazy. We always say we’re going to get somebody out here to video the first night and then come back on night eight. By night eight they’re laying down and staying, and we’re taking them inside of Tractor Supply,” Hayes said. “We’re passionate about making sure dogs don’t end up in a shelter because their owners couldn’t do anything with them. We really try to push spay and neuter, too. To give them a better, fair life is why we do this.”

Division heads presented their wish lists Thursday as the Board of Mayor and Aldermen held the first of two budget... read more