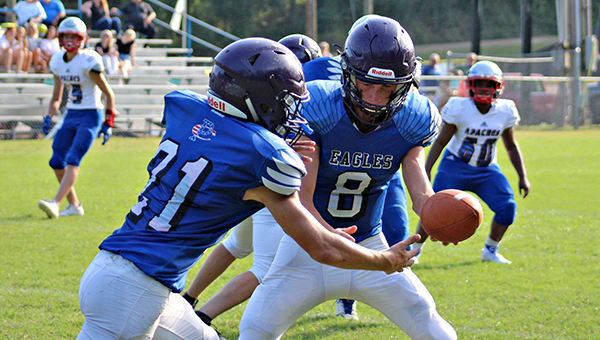 Braden Kapp shed one tackle, carried the football around the edge of the line, and was quickly blasted by a Tensas Academy defender as the crack of the pads mixed with oohs and ahhs from teammates and opponents alike.

Along the perimeter of the field, parents and fans watched and smiled at the action in front of them during the three-way preseason scrimmage between Porter’s Chapel Academy, Glenbrook Academy and Tensas Academy.

The game started too early for the Friday Night Lights to actually turn on, but it didn’t matter. For a couple of glorious hours, high school football was back in Mississippi and all of the world’s worries over COVID-19, school re-openings and other assorted craziness melted away.

“Inside the lines, it was kind of an escape,” Porter’s Chapel head coach Blake Purvis said. “Our administration had a good plan coming in and it looked like things were executed pretty well with the social distance and whatnot. Out here on the field, it was an escape. You almost, for 2 ½ hours, forgot that that even existed. It was football on Friday night and it was great to have it back.”

It was, of course, impossible to completely escape thoughts of the COVID-19 pandemic before and during the scrimmage. Players on all three teams had their temperatures checked upon arrival, and PCA’s administration sent reminders to fans of all three schools to socially distance in the stands and wear masks.

Distancing was accomplished. A total of 217 people attended the scrimmage according to PCA officials, safely below the 300 they were allowed to have under state guidelines. They sat mostly in small groups in the bleachers or lawn chairs scattered along the edges of the field, with at least the mandated six feet between them.

With temperatures in the low 90s at kickoff, however, most fans did not wear masks.

“At a glance, it looked like we had pretty good distance. It looked like family groups were sitting together and spreading themselves out,” said Purvis, who is also PCA’s athletics director. “We had people spread out throughout the end zone, so I thought our fans did a good job policing themselves. Which is going to be huge. The more help we can get from the spectators, the better chance we have to make this thing successful.”

As for the football, it was the mix of good and bad that typically defines preseason scrimmages. Each team ran about 40 plays on offense and defense, split between the varsity and junior varsity, in 10-play sequences starting from their own 30-yard line.

PCA split that up even more, with some eight-man snaps against Tensas. PCA plays 11-man football, but has two eight-man games on its schedule this season.

Running back Brayson Morson was the big offensive standout for PCA. He carried the ball nine times for 253 yards and four touchdowns — three 70-yarders and a 40-yarder — while splitting time between the varsity and junior varsity. Three of his touchdowns came during the JV portions of the scrimmage.

“He played a lot, and he’s going to do that a lot as long as he stays healthy. He’s very dominant in junior high, as many of those guys are, and he did exactly what I expected him to do,” Purvis said of Morson. “I think he touched the ball three times and had three touchdowns in junior high. That’s what we should see out of him. High school wise, he was great on the defensive side of the ball.”

Also stout on defense was Jace Jung. The eighth-grader intercepted two passes and returned one of them 50 yards for a touchdown.

Among the varsity, quarterbacks Jace Riggs and John Wyatt Massey combined to complete 6 of 17 passes for 106 yards, with one touchdown and one interception. Ricky Carraway was the leading receiver, with three catches for 24 yards. Bridger Jung scored a 70-yard TD on a jet sweep that was actually a quick forward flip and thus considered a touchdown pass.

“I thought we completed some passes. We completed some short balls, the high percentage throws, so that’s definitely a plus. We’ve got some work to do on our vertical passing game,” Purvis said. “When we can take some pressure off our offensive line with some short, quick passes it gives us a chance in the run game to be more successful. I think we saw that in the second series against Glenbrook. We completed some passes, we loosened them up, and we were able to get a little bit more success on the ground running the ball.”

All in all, PCA’s coaches and players agreed, it was an encouraging debut to a 2020 season they hope is an improvement on recent years. The Eagles have gone 3-17 over the past two seasons combined. This summer, however, they have raved about a new sense of positivity and optimism that things can turn around beginning with next Friday’s season opener at Benton Academy.

“We’re doing a whole lot better than last year, and I’m proud that our team is giving effort,” said junior running back Tyler Washington, who had six carries for 60 yards in the scrimmage. “We’re not in a negative mindset. We’re going into everything positive, and you can’t ask for anything better than that.”

In the 1990 MHSAA Class 5A playoffs, Vicksburg High saw its magical season end because of a blocked field goal... read more