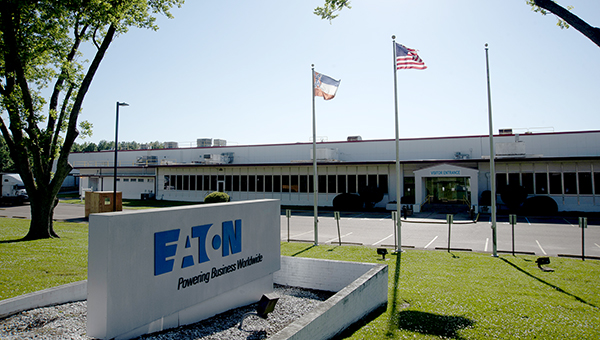 The parent company for Cooper Lighting, formerly Eaton Lighting, has announced job cuts at the Vicksburg facility totaling as many as 300 employees. (Courtland Wells/The Vicksburg Post)

As many as 300 jobs will be phased out at Cooper Lighting over the coming months. News of the job cuts came out during Monday’s Warren County Board of Supervisors meeting as a property tax abatement for the company came forward.

Board President Dr. Jeff Holland said during Monday’s meeting he heard of the impending cuts but had not received formal notification from the company. That notification came later in the week from a phone call from a senior official at Cooper Lighting’s parent company Signify.

Holland said Friday he was made aware employees at the company received a letter informing them of the cuts and that it would be as many as 300, phased in over a period of time, but “no longer than a year.”

District 3 Supervisor Shawn Jackson, during Monday’s meeting, questioned whether the should receive a tax break for $1.096 million in recent upgrades if jobs were being cut.

“I would ask the board to consider not granting this because in my notion even though it’s development, tax abatement comes with benefits for the community and unfortunately we believe from all accounts that it is imminent that more than two-thirds of their workforce is going to be reduced,” Jackson said. “I don’t believe that it’s the will of the local manager or executives here locally, but it is the case and given this case, I believe that the tax abatement should not be granted.”

The tax abatement on the upgrades would amount to $8,081.61 per year for five years. A similar request by the company to the Board of Mayor and Aldermen Monday was approved, giving the company a $5,890 break on its city property taxes.

Pablo Diaz, president and CEO of the Vicksburg Warren Economic Development Partnership, said he was aware of the company’s downsizing.

“The Economic Development Partnership has been contacted by the company and we are aware of their plans to downsize their presence in our area. It was made clear to us by Eaton representatives that this move is the result of a company-wide restructuring driven by the company’s need to optimize their use of production assets in North America, and not the result of any negative characteristic of either our region’s workforce or business environment,” Diaz said.

Although saddened that jobs will be lost, Diaz said “Our main focus is in working with the Eaton and other manufacturing plants in the area, to have a coordinated effort so that those employees that will be laid off, become aware and can apply, for other jobs available in the area.

“Fortunately, we have several manufacturers in the area that are actively hiring and in great need of employees,” he said. “We hope to be able to help the employees of Eaton have as seamless a transition into other jobs as possible.”

Supervisors tabled their decision on granting the company’s request until later, once more information on the job cuts was received.

Warren County Chancery Clerk Donna Hardy told the board they have until Aug. 17 to make a final decision whether or not to grant the ad valorem tax exemption to Cooper Lighting.

Saying goodbye to St. Francis was something Nosser never thought she would do

By Anna Kate Doiron | The Vicksburg Post   “I couldn’t wait to tell people I worked at St. Francis.... read more