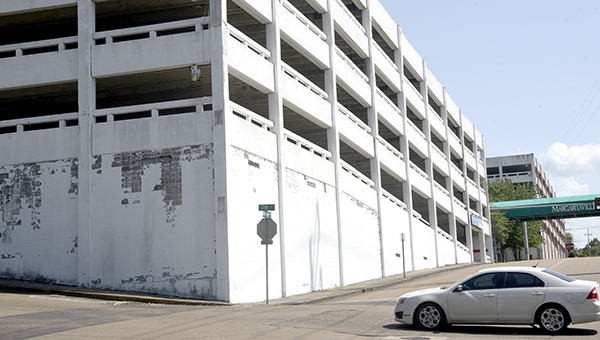 Mayor George Flaggs Jr. said the city is looking at how to curtail large gatherings in the city's parking garages and in parking lots in its next COVID-19 civil emergency order. (Courtland Wells/The Vicksburg Post)

Mayor George Flaggs Jr. is considering an ordinance prohibiting groups from congregating on the city’s public parking garage and other parking lots in the city at night.

“As it relates to this virus, I keep telling you that transmission of this virus is pretty much being transmitted by (people) the age of 28 and 30,” he said. “We’ve been having a lot of young people congregating on parking lots.”

Flaggs said he has talked with City Attorney Nancy Thomas about developing an ordinance to stop the large gatherings at lots by issuing citations for the violation.

“I don’t want to do that yet, but we’ve got to do something to be safe,” he said.

Over the weekend, he said, the city put one of the police department’s mobile video cameras at one of the sites where people had been gathering.

“I saw some of your sons and daughters; I recognized some people,” Flaggs said. “There were more than 20 in groups.”

“Weekend before last and last weekend I rode around to the neighborhood playgrounds and what I see is not only appalling but it is dangerous,” Mayfield said, saying he has seen young people ignoring social distancing by dancing closely and not wearing masks “and that is dangerous at this particular time.”

Mayfield asked people to think not only of themselves but their families “that you may carry the virus home to when you’re out there having a good time.”

“Pay attention to what you’re doing,” Mayfield said. “It’s very dangerous out there and you could very easily catch this virus.”

The Board of Mayor and Aldermen in July amended its COVID-19 emergency declaration to require people to wear masks in all businesses. The order was amended Aug. 3 to exempt manufacturing businesses from the mask regulation.

Flaggs has already closed one popular gathering place, the pavilion in the Douglas Park area of Marcus Bottom, out of concern for potential infection from COVID-19.

He made the move, he said, after visiting the area several times and noticing violations of the city’s regulations.

“I did it to save lives,” Flaggs said Monday.

The Commission to Redesign the Mississippi State Flag considered the nearly 3,000 flag submissions and narrowed their choices to 147.... read more