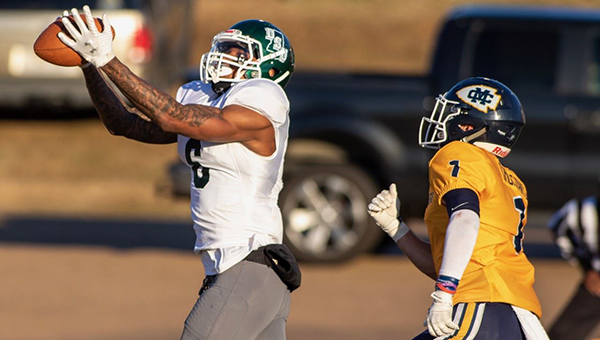 Delta State cornerback Junior Faulk (6) catches a pass in front of Mississippi College receiver Cole Rotenberry (1) last season. The two Gulf South Conference teams will not play football in 2020, after the league announced Wednesday that it is postponing all athletic competition until at least Jan. 1. (Hays Collins/Delta State University)

BIRMINGHAM, Ala. — One of the top NCAA Division II football conferences in the country has postponed its season.

The Gulf South Conference announced Wednesday that it will postpone competition in football, basketball, soccer and volleyball until at least Jan. 1.

Members of the Gulf South Conference include Mississippi College and Delta State.

The conference said in a statement that it will evaluate its options for spring competition in football, soccer and volleyball. It will announce a revamped basketball schedule and calendar “over the next several weeks.”

The decision does not affect spring sports.

In July, the Gulf South Conference had delayed the start of its fall sports season until at least late September.

In its statement announcing the decision to fully postpone the season, the GSC said three factors led the conference Board of Directors to its decision: the health and safety of student-athletes and campus communities; mandated participation protocols from the NCAA Board of Governors; and the NCAA’s earlier decision to cancel fall championships for Division II and Division III.

The GSC’s decision leaves only three of Mississippi’s 10 college football teams on track to play in 2020. The Southwestern Athletic Conference, whose members include Alcorn State, Jackson State and Mississippi Valley State, announced in July that it will shift its season to spring. The Division III conferences containing Millsaps College and Belhaven University also canceled their seasons.

Southern Miss has already opened its preseason training camp. Southeastern Conference members Mississippi State and Ole Miss are scheduled to begin later this month, although that league will only play conference games and delayed the start of its season until Sept. 26.

The Vicksburg Post welcomes your items for the Game Plan. Submit items by email to sports@vicksburgpost.com for publication Wednesday or... read more