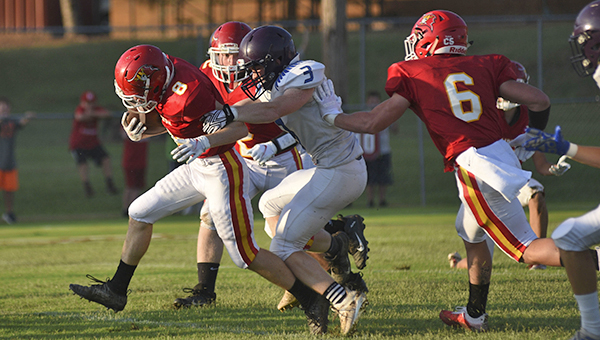 YAZOO CITY — After a summer of uncertainty, and in a world where every game might be their last, any chance to play football this season is one players will be sure to savor.

As the Porter’s Chapel Academy Eagles found out Friday night, however, that doesn’t mean every week is going to be particularly enjoyable.

It was a deflating result for PCA after an offseason of optimism and a solid showing in last week’s preseason scrimmage. The Eagles finished with 124 yards of total offense, turned the ball over four times — three of them in the first half — and had their defense gouged for more than 300 rushing yards. They also were only able to recover one of Benton’s five fumbles.

They’ll try to pick themselves up off the mat next week when they travel to face Newton Academy.

“It was fun getting back out here with my family, but we did not give it our all and I could see it in everybody. We are a team and we are a family, and I know we are better than that,” PCA junior offensive lineman Bridges Williams said. “We practiced our butts off this summer. This is what we needed. We needed to see this loss so we could carry on for the rest of this season to get these wins. I love this team. We’re going to turn it around this season.”

PCA’s two touchdowns came on the first play they touched the ball and the last. Tyler Washington broke a 61-yard touchdown run up the left sideline on the team’s first offensive snap, and Brayson Morson returned a kickoff 93 yards to the end zone on what turned out to be the game’s final play.

Everything in between was a series of ill-timed mistakes, turnovers, missed tackles and general sloppiness.

“Just a lack of focus,” PCA coach Blake Purvis said. “I don’t know if we thought we were fixing to walk over them and then they hit us in the mouth and we weren’t ready, but the whole first half we just had a lack of focus. We were misaligned, had untimely penalties, and just execution mistakes on offense.”

PCA went three-and-out on its first possession of the second half, and Middleton hit Lowery with a 45-yard touchdown pass to make it 33-6. Lowery finished with three catches for 91 yards and two touchdowns.

Benton cleared its bench after that, but still scored two more touchdowns on runs of 20 and 26 yards — the latter on fourth-and-goal midway through the fourth quarter — by Rye Yeates. Yeates finished with 62 yards and two touchdowns on only four carries.

For PCA, Washington totaled 88 yards and one touchdown on nine carries. In addition to his kickoff return, Morson had 11 tackles and two forced fumbles on defense. Willie Rogers added eight tackles.

On the eve of the high school football season, Mississippi governor Tate Reeves issued an executive order that will limit... read more