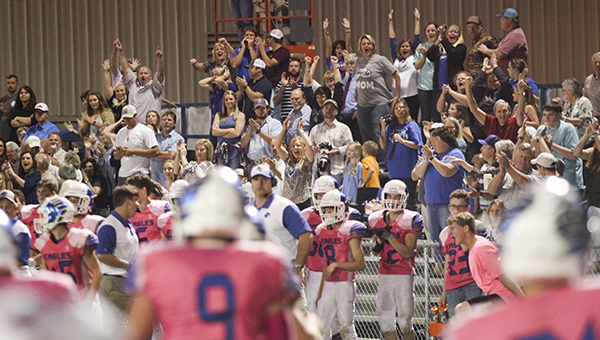 Porter’s Chapel Academy fans cheer for their team during a game in 2017. Attendance at games in the early part of this season will be limited to two per participant, according to an order issued by Gov. Tate Reeves on Friday. (Courtland Wells/The Vicksburg Post)

On the eve of the high school football season, Mississippi governor Tate Reeves issued an executive order that will limit attendance at games.

Reeves’ order limits attendance at all K-12 extracurricular actitivies such as football games to no more than two spectators per participant. Each extracurricular event must also have a dedicated safety officer to ensure all social distancing measures are followed.

Porter’s Chapel Academy’s season opener at Benton Academy on Friday night is not covered by the order.

“Sports and these other activities are instrumental in the lives of our young Mississippians. They teach discipline and responsibility in a way that can’t be replicated,” Reeves said at his press briefing on Friday. “That said, we are living through a pandemic. One of my greatest concerns heading into this school season has been sports and those other events which cause the community to come out in crowds. Twenty-two players on a field is not going to overwhelm a local hospital. Two thousand people in a small school’s bleachers might.”

The range of dates means a handful of Friday’s MAIS football season openers — including Porter’s Chapel Academy at Benton Academy — were not covered under the order, and neither is the start of the MHSAA season on Sept. 4.

It will, however, include a number of MAIS football games — the private school association begins its season in full on Aug. 21 — as well as softball, volleyball, cross country and soccer games.

The MHSAA volleyball season begins Aug. 24, and MAIS soccer and softball teams have been playing since early August.

St. Al’s football season opener is next Friday on the road against Hartfield Academy. That game will be played at the cavernous 60,000-seat Jackson Memorial Stadium because of construction at Hartfield.

“We depend on the gate and concessions. That’s big to us,” Jones said. “It’s something we’re going to have to sit down and figure out how we can do this, and come game time how we’re going to enforce it.”

Jones also said the attendance limits will be a bigger issue for football than for other sports that have smaller crowds at most games. Jones said St. Al normally has around 1,000 people at its football games, but often less than a hundred at softball and soccer games.

The governor’s order would likely limit St. Al’s attendance for football to about 300 fans, Jones said, but it could be more depending on a number of factors such as whether the visiting team brings a band or has a larger roster.

“We haven’t had a chance to digest it,” Jones said. “We played with the numbers for about two minutes. You’re looking at the football team, the cheerleaders, the dance team and the band members, and we’re looking at 300 if everybody brings two. It’s not that far off from where you normally are.”