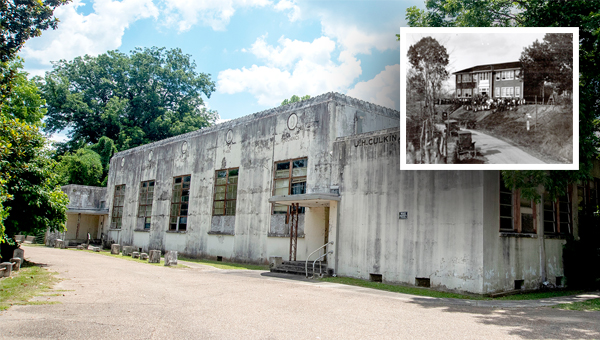 Culkin School remains a cherished memory for many

For many people driving along Culkin Road, the vacant, weather-stained concrete building at the intersection of Culkin and Mount Alban Road is just another empty building in the county.

But for former students and residents in the Culkin community who grew up in it during the school’s golden years, that old building was once the focal point of the area; a place where children received an education and developed lifelong friendships and memories that have never died.

“Culkin’s my heart,” said Annie Douglas Warnock, a 1962 Culkin graduate. “I could talk all day about Culkin.”

For former students like Warnock, the school was more than a place to learn. It was a family tradition.

“I started Culkin in the first grade,” she said. “My older brother and sister, who were 12 and 13 years older than I was, went to Culkin. My dad was at Culkin way back when it was in a different place than it is now. My daughter went there when it was an elementary school. We have quite a few generations. The class of 1962 was probably the liveliest class Culkin ever had.”

In the years before Culkin closed, Warnock and Fultz said, Culkin had a family atmosphere.

“It was one big family from all classes and ages,” Fultz said. “Everything worked together from the parents to the teachers; everybody’s parents looked out for everybody’s kids.”

The school at the intersection of Culkin and Mount Alban roads was named for John H. Culkin, a Warren County native who served as county superintendent of schools from 1912 to 1926. He is credited with ending the county’s one-room school system and replacing them with centralized schools.

He also established the eight-month school year and expanded the curriculum. He set minimum education requirements and initiated competition between schools in athletics.

Culkin resigned in 1926 to practice law and later served as a state senator. He died in 1951.

The first school to bear his name was a two-story wood-frame building on Oak Ridge Road built in 1916 for $4,800. The school burned in 1924 and a new school was built on the site of the present building. After it burned, the present 42,628-square- foot building was built in 1939 by Work Progress Administration workers and was formally dedicated in 1942.

The building was an elementary and high school through 1965, and in 1941-42, the total attendance was 423 students. The high school was later closed and the students transferred to Warren Central High School, making Culkin an elementary school for grades K through 6. The Vicksburg Warren School District closed the school in 1999.

Jack Grogan, its last principal, said in a 1999 article in The Vicksburg Post on the closing, the school always had the support of the Culkin community, which bought lighting for the football field, and in the late 1980s raised $60,000 to air condition the school. The community also opposed the school’s closing.

Going to school at Culkin, Warnock said, “Was the best experience of my life. The entire time I was there W.C. Sullivan was the principal. We all called him Pop; that’s what he told us to call him and we did. He was a fantastic principal. He had the knack of knowing what every kid needed. He was a wonderful principal.

“I remember starting first grade and I don’t think there was a teacher I didn’t like. Some were a lot stricter than others, but they were all great teachers, and I have such fond memories of all of them.”

Sullivan, Fultz said, looked out for the school’s students and teachers. “They were the kind of people you wanted to be around,” he said.

“All of our teachers were very good,” he said. “They were very handpicked by Mr. Sullivan and Mr. J. Noel Nutt was the superintendent of education then.”

She remembered L.W. Simmons, who taught history at Culkin, and Bill Tate and Billy Joe Crawls, the girls’ and boys’ basketball coaches.

“They were fantastic coaches,” Warnock said. “Coach Tate was one of the best motivators I’ve ever known in my life. He could make you believe anything.”

Sullivan’s wife, she said, taught senior English, “And God bless her, she didn’t think I was learning a thing, because I played a lot in school. I enjoyed my school years.

Man, have I ever used what she taught me since I started writing.”

“He was excellent; he also taught math and he was good,” he said.

And there were no strangers at Culkin.

“There’s something in a smaller school that kids going to these big schools don’t have,” Warnock said, “It’s knowing everybody. I promise you I think I knew everybody from the first grade through the 12th grade, and having an older brother and sister, I really knew a lot of people through the years.”

“We had dances, sock hops after the ball games and we’d meet up at Aunt Minnie’s Kitchen and have a hamburger,” Fultz said. “We had all the sports there, football, basketball baseball, and most of us participated in that. We’d go and do things together.

“I had a hard time there because my mother was employed by the school system and my daddy was a teacher. I had to hide from everything,” he said.

Fultz said his fondest memories of the school are of the friends he made at Culkin.

“It was always a lot of friends,” he said. “It was continuous. When some of us didn’t have our driver’s license, the older ones would haul us around. We were close with the class of 58 ahead of us.

“There weren’t that many people in the classes, so everybody knew everybody. And a lot of the classes knew the other classes. We did things together.”

“It was great; it was the best of times,” Warnock said.

Each first day of the school year, Vicksburg Warren School District leaders make their way to each of the schools.... read more