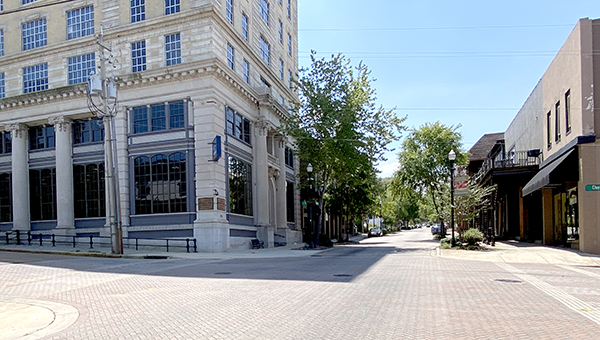 The city may test the idea of closing portions of downtown Vicksburg to pedestrian traffic only beginning this Thursday. The plan would close Washington Street, from Clay Street to South Street, beginning at 7 p.m. Thursday. The road would be closed to vehicle traffic each night until 7 a.m. the following morning. The closure would be for Thursday, Friday and Sunday nights, ending at 7 a.m. Monday. (Tim Reeves/The Vicksburg Post)

A proposal by Mayor George Flaggs Jr. would allow blocking off a section of Washington Street for outdoor dining three nights a week if the Mississippi Department of Revenue gives its blessing.

Flaggs mentioned the idea at Monday’s meeting of the Board of Mayor and Aldermen during a comment period before addressing the meeting’s agenda.

“I’ve got this crazy vision about how we’re going to re-do downtown,” he said. “I believe when you ride downtown you see more of the outdoor flavor type gathering and eating.

“Just imagine closing down Washington Street to cars and (allow) only walking traffic from Clay Street to South Street and be able to put tables in the street to eat,” Flaggs said.

His idea would allow pedestrian traffic and outdoor seating each Thursday, Friday and Saturday nights from 7 p.m. to 2 a.m.

“That’s just a wild dream of mine to do that if we get permission (from the state) to serve something stronger than Coke on the street,” he said. “These are some of the things we can do to raise revenue without raising taxes.”

In October 2017, the board approved an ordinance establishing a leisure and recreation district allowing customers to buy their favorite alcoholic beverage at a restaurant or club in an area known as the “Washington Street District.”

The ordinance allows patrons to take the beverage with them when they leave or sit at an outside table at the business to enjoy their drink.

On Aug. 3, the board authorized City Attorney Nancy Thomas to prepare a letter to the Department of Revenue supporting the sidewalk tables at restaurants for the sale of alcoholic beverages inside the leisure district.

While the full details of what exactly is involved in “Project Octopus” are still weeks away, the Warren County Board... read more