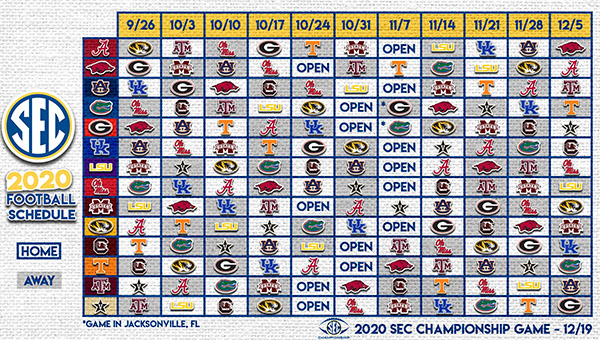 The Egg Bowl will maintain is traditional spot on the schedule on Thanksgiving weekend, but for just the second time in 74 years it will not mark the end of the regular season for Ole Miss and Mississippi State.

The two in-state rivals will play on Nov. 28 in Oxford, in the next-to-last week of the season, according to the revised Southeastern Conference schedule released Monday.

Ole Miss and Mississippi State have played on Thanksgiving weekend or in late November every year since 1926. Since 1946, however, the only other time they haven’t finished the regular season against each other was in 2001 when the 9/11 terrorist attacks added a week of rescheduled games to the slate in early December.

This time, the revamped schedule caused by the COVID-19 pandemic will conclude on Dec. 5. Mississippi State will play its final game at home against Missouri, while Ole Miss finishes with a road trip to defending national champion LSU.

Each SEC team will play a 10-game, conference-only schedule beginning on Sept. 26. The SEC championship game is Dec. 19 in Atlanta.

Mississippi State will open the season on Sept. 26 at LSU, which is one of three road games against national championship contenders as well the MSU debut of new head coach Mike Leach. The Bulldogs also play at Alabama on Halloween, and at Georgia on Nov. 21.

Ole Miss begins its season at home against Florida — which will also mark the debut of new head coach Lane Kiffin — and then hosts Alabama two weeks later on Oct. 10. Other home games include Auburn (Oct. 24), South Carolina (Nov. 14) and Mississippi State (Nov. 28). Its open date is Nov. 7.

After beginning the defense of its national title against Mississippi State, LSU vists Vanderbilt and hosts Missouri before traveling to Florida on Nov. 17.

LSU and Alabama both have their bye weeks on Nov. 7, and then face each other in their annual SEC West showdown the following week in Baton Rouge.

Other key games on the SEC schedule include:

A number of college football conferences have announced plans to postpone their season until spring, but on Monday the Southwestern... read more