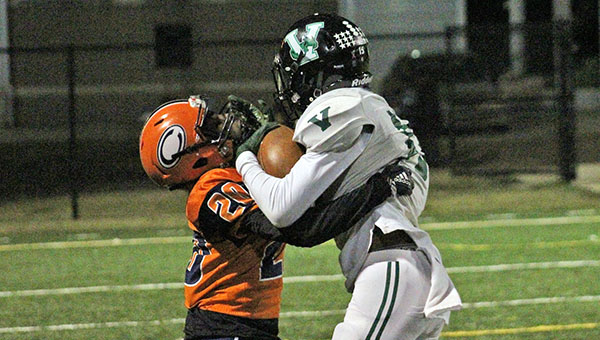 Vicksburg High receiver Keveon Smith (15) is wrapped up by Callaway’s Marquis Allen (20) during a game last season. Vicksburg will not play Callaway or Provine this season after the Jackson Public Schools district announced last week it will not participate in fall sports because of concerns about the COVID-19 virus. (Ernest Bowker/The Vicksburg Post)

Vicksburg High and Warren Central are looking for football opponents — again — to fill a couple of holes in their 2020 schedules.

Vicksburg had two games canceled and Warren Central one when the Jackson Public Schools district announced last week that it will not participate in fall sports this season because of concerns about the COVID-19 virus.

Vicksburg had its Region 2-5A opener at Provine on Sept. 25, and a home game vs. Callaway on Oct. 30 canceled. Warren Central lost its road game at Murrah on Oct. 16. Warren Central had also previously lost a road game at Greenville on Oct. 2 when that school district also opted out of fall sports.

Vicksburg Warren School District athletic director Preston Nailor said Monday that both Warren County teams are seeking replacements for the canceled games, although nothing has yet been finalized. The canceled games will count as forfeit wins on the records of Vicksburg and Warren Central.

There are seven high school football programs in the JPS, which created a number of holes in schedules around the state. They are among 18 in Mississippi that will not play football this season because of COVID-19 concerns.

“Hopefully in the next couple of days we’re going to see who is out there and wants to play,” Nailor said. “We understand with Greenville canceling their season and now JPS, there are a lot of teams without games. If we can pick up a game as we matriculate through the year, and keep our kids safe and prepared, that is something we’ll look at doing.”

This is the latest adjustment to a schedule that has been in flux all summer long. The Mississippi High School Activities Association’s decision to cancel the first two weeks of the season, and various school districts’ decisions to cancel their entire seasons, has forced Vicksburg, Warren Central and other teams around Mississippi to shift their schedules several times.

Six of Vicksburg’s 12 playing dates on its original schedule have changed in some way. In addition to the two games canceled by the MHSAA, a Sept. 11 game against Benton (La.) was canceled and replaced with one against Biloxi; a road game at Natchez was added to fill an open date on Sept. 18; and then the two region games against JPS opponents have become open dates.

On Wednesday, Vicksburg officially added a home game against South Pike to replace its canceled game with Provine. The game will be played on Thursday, Sept. 24, at Warren Central. The Oct. 30 playing date remains open.

Warren Central has been able to keep more of its schedule intact. A canceled home game vs. Pearl in Week 2 was simply rescheduled to what had previously been an open date on Sept. 18. Its other non-conference games against Vicksburg (Sept. 4) and Brandon (Sept. 11) have not been affected.

The two canceled games with Greenville and Murrah, however, do give Warren Central a distinct home field advantage this season. Seven of its eight remaining games are at Viking Stadium, with the only road game a trip to Starkville on Oct. 30.

Rescheduling games postponed by weather is common in baseball, softball and soccer. Football is different. The limited number of playing dates in football, and the fact schedules are prepared two years at a time, makes each year’s schedule a mosaic where it is not nearly as easy to find replacement opponents on the fly.

The one bright spot, Nailor said, was that with so many teams having canceled their seasons, there are now more opponents with open dates that line up with each other.

“The schedule has changed six or seven times. It’s easy with baseball or soccer, when you expect it. With football, this is impacting everybody. Everybody has been easy to work together with to find solutions,” Nailor said. “It’s not just us in the boat paddling. It’s all of us rowing down the river together.”

In addition to hunting for opponents, Nailor has been trying to hunt down a place for Vicksburg and Biloxi to play each other on Sept. 11.

After the game was added to the schedule earlier this month, it was penciled in as a neutral site contest at Mississippi College. That plan was nixed, however, because of rules prohibiting on-campus events during the pandemic. Attempts to move the game to several junior colleges around the state met the same problem.

Vicksburg’s home stadium will not be available until at least late October because of ongoing construction work. It will play its home games at Warren Central, but schedule conflicts with Vicksburg, Warren Central and Biloxi prevented it from being played at Viking Stadium the weekend of Sept. 11.

Nailor said the site of the Vicksburg-Biloxi game is still up in the air, but will either be at Biloxi or at Veteran’s Memorial Stadium in Jackson.

If the latter, it might be played on Saturday, Sept. 12 — with no time determined yet — because the stadium is hosting several high school games each weekend after Jackson State University canceled its season.

St. Aloysius is playing Hartfield Academy at Memorial Stadium this Friday at 7 p.m.

“It’s been in three or four different places in the last week,” Nailor said with a laugh. “With the jucos not opening their facilities in the last week, it’s put a damper on things. If Jackson can’t host us, then we’ll travel to Biloxi.”

Sports column: Mississippi has a chance to lead the way on football

Somehow, some way, we’ve made it. It’s been five months since the COVID-19 pandemic arrived and laid waste to America’s... read more