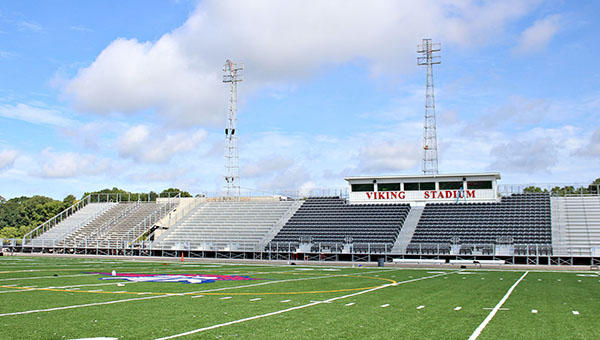 Limited number of fans will be allowed at Red Carpet Bowl

The 2020 Red Carpet Bowl will be a tough ticket, but there will be tickets.

At a special meeting Thursday afternoon, the Vicksburg Warren School District Board of Trustees voted to allow a limited number of fans to attend the football season opener between Warren Central and Vicksburg High on Sept. 4.

Each senior from the football teams, band, cheerleading and dance squads will be allowed to purchase two tickets for the game. No tickets will be sold at the gate, and any of the advance tickets that are not sold will be discarded.

The plan, one of five presented to the board by VWSD athletics director Preston Nailor, will allow approximately 150 fans into the seats at Viking Stadium and only applies to the Vicksburg vs. Warren Central game. The school board will discuss the plans for other games at its monthly meeting on Aug. 27.

The game on Sept. 4, which serves as this year’s Red Carpet Bowl, will be broadcast for free on Facebook Live and for a fee as part of the NFHS Network livestream package.

“We’re excited that the kids get to play, and we want to protect everybody. We wanted to ensure the board had adequate information to make a decision,” VWSD superintendent Chad Shealy said. “I think we can manage the event this way.”

The other plans presented by Nailor ranged from having no fans to as many as 1,000. The latter total was based on Gov. Tate Reeves’ executive order capping attendance at two spectators per participant to slow the spread of the COVID-19 virus in Mississippi. There are a little more than 500 football players, band members and cheer and dance team members, which would have placed more than 1,500 people total in the stadium on game day.

Several school board members, as well as superintendent Chad Shealy, expressed concern that such a large crowd could create a “super spreader” event that would create an outbreak in Warren County. At the same time, board members expressed a desire to continue with one of the biggest community events of the year.

After nearly an hour of discussion, the final plan passed by a 3-1 vote of the five-person board, with Jim Stirgus, Jr., abstaining. Sally Bullard, Bryan Pratt and Kimble Slayton voted for the plan, and Alonzo Stevens voted against it. Stevens voiced a preference for the option of a larger crowd.

“I think the board members did a great job of putting their heads together and coming up with a plan to allow the kids to participate,” Nailor said.

Each senior participant in the game will have the opportunity to purchase two tickets, which cost $7 apiece, the week of the game. Any tickets that are not purchased will not be resold.

Tickets will be paper and dropped in a basket at the gate to reduce the risk of transmitting COVID-19. All fans must wear a facemask while entering and exiting the stadium, and until they reach their seats. Concessions will be available “baseball style,” with vendors roaming the stands rather than an open concession stand, to help keep fans from moving around the stadium.

No pass outs will be given, and no loitering in the parking lot will be permitted.

The same process will be followed for a volleyball game scheduled for Tuesday between Vicksburg and Warren Central. That game will begin at 5 p.m. with the junior varsity, and 6 p.m. for varsity at Warren Central Junior High. It will also be senior night for both teams.

In addition, the board on Thursday voted to prohibit fans from attending a pair of football scrimmages involving Warren Central and Vicksburg on Aug. 28, and a four-team volleyball tournament on Aug. 29. In making that recommendation to the board, Nailor said the logistics of sanitizing the facilities in between games would be too difficult to manage if fans were permitted to attend.

Vicksburg will play Hazlehurst at 5 p.m., and Warren Central at 7:30 at the preseason football scrimmage at Viking Stadium next week.

When St. Aloysius kicks off the 2020 high school football season, the lights will be a little brighter than usual... read more