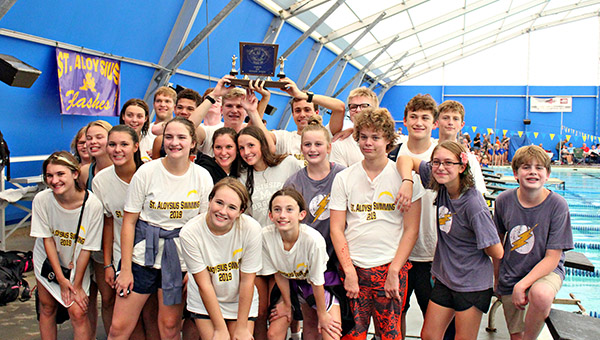 The St. Aloysius swim team poses for a photo with the trophy after winning the 2019 MAIS state championship. The MAIS announced Wednesday that it is postponing this year’s state meet because of a number of issues related to the COVID-19 pandemic. (File/The Vicksburg Post)

St. Aloysius will reign as the Mid-South Association of Independent Schools’ swimming champion for a while longer.

The MAIS on Wednesday announced it has postponed its 2020 Overall Swim Meet, scheduled for mid-September, because of issues caused by the COVID-19 pandemic.

In a statement announcing the decision, MAIS director of activities Les Triplett said a lack of available facilities and attendance restrictions made it unfeasible to hold the event on time.
Triplett said the meet could be rescheduled for the spring, but did not lay out an exact plan.

“As we have contacted several of our past facilties, we found that they are either closed or have significantly limited their number of participants. Bringing in spectators would, at this time, not be possible,” Triplett said. “While we are certainly disappointed, we also remain optimistic that we can have one before the school year is over.”

St. Aloysius won the 2019 MAIS championship, ending Jackson Prep’s 45-year run as champion. It was not immediately clear whether St. Al would continue its swim season.