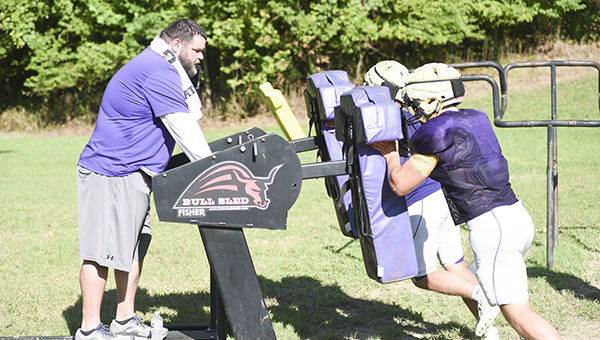 When St. Aloysius kicks off the 2020 high school football season, the lights will be a little brighter than usual and social distancing will not be a problem.

St. Al will go on the road to play its season opener against Hartfield Academy Friday at 7 p.m. It is Hartfield’s home game, but because of construction work at its stadium the game has been relocated to the cavernous 60,000-seat Mississippi Veterans Memorial Stadium in Jackson.

Stacy Sizemore, who will make his debut as St. Al’s coach, said it’s a unique venue in which to kick off the season.

“It’s going to be good for us. Our kids have been working hard, and that’s a big stage. The kids are looking forward to it,” Sizemore said. “In warm-ups and everything it’s going to be different. Once the game starts, they’re not even going to notice it.”

Last week, Mississippi Gov. Tate Reeves issued an executive order limiting attendance at football games to no more than two fans per participant to help slow the spread of the COVID-19 virus. The order was intended to give fans room to socially distance themselves, but that doesn’t figure to be a problem this week. Fewer than 1,000 fans were likely to attend the game even before the order, and they’ll have a lot of room to spread out.

St. Al athletic director Mike Jones said any fans attending the game should enter Memorial Stadium through Gates 8 and 9, located on the State Street side across from University of Mississippi Medical Center.

Hartfield is a tough assignment for St. Al coming out of the gate. The Hawks finished 8-4 last season — including a 29-10 victory over St. Al — and reached the second round of the MAIS Class 5A playoffs. They boast one of the top wide receivers in the state, Brandon Buckhaulter, and averaged 28 points per game last season.

“They do a great job. The Buckhaulter kid is a great talent and you need to know where he is at all times, but they block well and tackle well, too,” Sizemore said. “It’s going to be a big challenge for us. We’re going to do the best we can and get better.”

Getting better, Sizemore said, is the real focus for the Flashes. They are rebuilding a bit, with not only a new coach but more than a dozen new starters as well.

Sizemore got his first look at the 2020 Flashes two weeks ago during a scrimmage at Brookhaven Academy and said there was the mix of good and bad that’s expected with a young team seeing its first live action.

Building on the good and eliminating the bad, he said, was the goal not just for the opener but throughout the early part of the season.

“We felt like there were good things and things we need to work on. We found out our kids will play hard. We need to focus on the process and not the end result,” Sizemore said. “We’re going to be a work in progress, and that’s what this is all about.”

St. Aloysius will reign as the Mid-South Association of Independent Schools’ swimming champion for a while longer. The MAIS on... read more