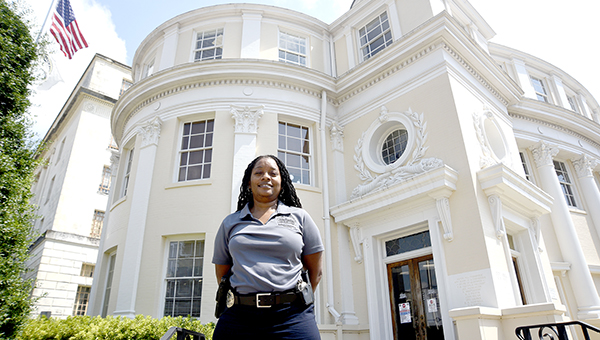 Thursday marked one month on the job for Tabitha Martin-Crawford as the city's compliance officer. (Courtland Wells/The Vicksburg Post)

Vicksburg’s businesses are complying with the provisions of the Board of Mayor and Aldermen’s emergency declaration, the city’s compliance officer said.

And after visiting hair and nail salons, stores and restaurants in the city for the past month, compliance officer Tabitha Martin-Crawford said “everybody is doing exactly as they should.

“They are wearing masks, they are social distancing they are following the protocols, they are asking questions, they really want to do what is asked of them,” she said.

So far, she said, she hasn’t written any citations for businesses, “although I’ve had some that were right there on the edge of almost getting a citation. I’ve had to inform them what they need to do so they won’t get a citation, but a lot of them are doing exactly what I’ve asked them to do. They are on it.”

A former Vicksburg police officer and a retired attorney general’s investigator, Martin-Crawford was hired in July by the board to enforce the emergency declaration’s requirements.

Her initial duties involved education; going to the businesses in town and explaining the provisions of the emergency decree to business owners.

“That’s what the mayor wanted me to do, just go out and inform everybody of the new orders and give them (businesses) the opportunity to get in compliance with the order,” she said. “He didn’t want the citations written first off; he wanted to make sure they were informed and given copies of the order before issuing citations.”

Her day involves riding through town and stopping at businesses unannounced to check compliance.

At restaurants with drive-through service, she will watch the employees at the windows and if she sees someone not wearing a mask properly she informs the management.

“Everybody is behaving themself,” she said. “You look at the numbers looking good so it means everyone’s doing what they’re supposed to do.”

There is, however, one group that is not following the rules.

“On weekends, our young adults are socializing in parking lots not wearing masks and keeping social distance,” Martin-Crawford said, adding the parking lots on Clay Street and Indiana Avenue are the favorite locations for gatherings.

She said she often drives around town on the weekends and when she sees large crowds she calls Vicksburg Police who have issued citations for violating the emergency declaration involving crowds.

According to police department records, two citations were issued at two businesses, the Tatoo and Entertainment Hall and the Lady Cave, both at 2121 Clay Street, Aug. 8. The citations were issued because 25 people were at the businesses without maks and social distancing and failed to leave after police told them to disperse, according to police reports. If found guilty the business owners face fines of $1,000 each.

Besides visiting businesses, Martin-Crawford also takes complaints from the public.

“In the beginning, it was call, call, every week,” she said. “Now I get one or two calls a week.”

“I’ve had people call complaining about people not wearing masks in businesses and when I get there, people are wearing their masks,” she said. “In grocery stores, people are more concerned about the sanitizers for the shopping carts and I get calls about that. With restaurants, the biggest complaint is the employees do not have the masks over their nose. I go and talk to the managers about the complaint and ensure compliance.”

When she receives a complaint, Martin-Crawford said, she tells the business about it and reminds them to make sure it and the employees are complying with the regulations.

Sometimes she will remain in a store and monitor customer traffic to see if people are wearing the masks.

When she took the job of compliance officer, Martin-Crawford said, she thought it would be a difficult job.

“It takes time for people to get used to change and when you have something they don’t understand or is new to them,” she said.

“It takes a while for them to fall in line and do what they’re supposed to because this is totally new to them. I was expecting people to be very resistant but everybody I have talked to has been willing to do what I asked them to do no problem.

“The people here care about each other and they’re going to do what you ask them to do. That made it much better.”

Nearly 3,000 submissions were presented to the Commission to Redesign the Mississippi State Flag and when it got down to... read more