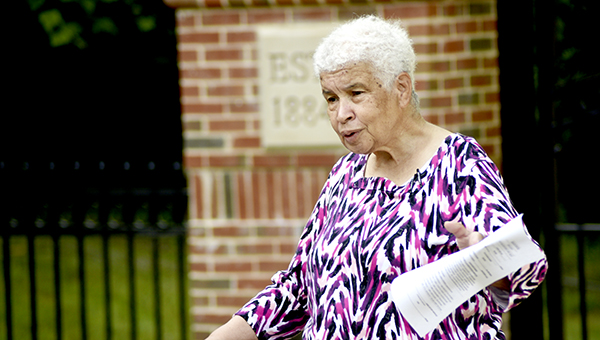 Yolande Robbins speaks during the dedication ceremony for the new fence and arch at Beulah Cemetery in June 2018. Beulah Cemetery is a historic African-American cemetery established in 1884. (Courtland Wells/The Vicksburg Post, file photo )

Vicksburg lost one of its voices and a chronicler of its past with the death Aug. 21 of Yolande Robbins.

A native of Vicksburg, Robbins was a member of St. Mary’s Catholic Church, where she attended school until she moved to Illinois to live with family. After graduating from Mundelein School for Girls she enrolled in Loyola University and received a degree in linguistics. She taught for many years in the Evanston, Ill., School System.

After retiring, she returned home to Vicksburg, where she became involved in the family business, Robbins Funeral Home, and established the first African American Museum, The Jacqueline House, in the former home of her sister, Jacqueline Robbins Rose, to tell the history of African Americans in Vicksburg.

In 2016, she acquired the home of the late Dr. Jane McAllister at 1403 Main St., to preserve it and turn it into a museum honoring the first black woman to get a Ph.D. from Columbia University in education, and one of the first women in the U.S. to get a Ph.D.

Robbins was a columnist for The Vicksburg Post for more than three years. Her columns covered a variety of subjects including community history, African American history, social injustice, civil rights and vignettes on people living in the community.

“Yolande was the biggest cheerleader for African Americans in Vicksburg and the accomplishments that went unnoticed by many,” said Leo Turnipseed, owner of Outside the Box. “She devoted her life to making sure that not only the citizens of Vicksburg knew the contributions of African Americans but she dedicated her life to making sure that the artifacts, the articles, memorabilia were made available to the public so that history wouldn’t be forgotten.”

Turnipseed said he and Robbins had been friends since he and his wife came to Vicksburg and she was the biggest cheerleader for his business when he started it. He said he was working with her on a project to organize the Jacqueline House Museum to ensure the exhibits would be properly cared for.

“My heart and my prayers go out to her family and the many, many friends that she had,” Mayor George Flaggs Jr. said. “Yolande was a unique but yet brilliant person. In my opinion, she was an icon. She was on the front line for justice. She fought injustice; she either wrote about it or talked about it.

“Through her brilliant talent for writing, she tried to communicate the good in a situation as best she could,” Flaggs said. “Our community has lost a giant of a person who knew the history of this city and the people of the city.”

Linda Fondren said Robbins was on the board of directors for the Catfish Row Museum, calling her “one of Vicksburg’s favorite intellectuals.”

“She wrote about the unspoken. Her courageous words spoke to all people. I will never forget her love, passion, commitment, and service to our community,” she said. “I have many favorite quotes from Yolande, and my favorite is, ‘I won’t walk you all the way, but I will walk you a piece of the way.’”

“She was a great educator,” said Gertrude Young, a former Vicksburg Alderwoman. “She loved to tell the history of this community and she also was just a connector between the young and old on Main Street because she loved children and she loved the elderly. She will be greatly missed.”

She is survived by nephews Kevin P. Rose of Seattle, Wash., and Anthony L. Rose of Chicago, Ill.; niece, Patrice L. Rose of Vicksburg; and other relatives and many close and dear friends including her dear friend, Dr. Josephine Calloway and family.

Vicksburg’s businesses are complying with the provisions of the Board of Mayor and Aldermen’s emergency declaration, the city’s compliance officer... read more