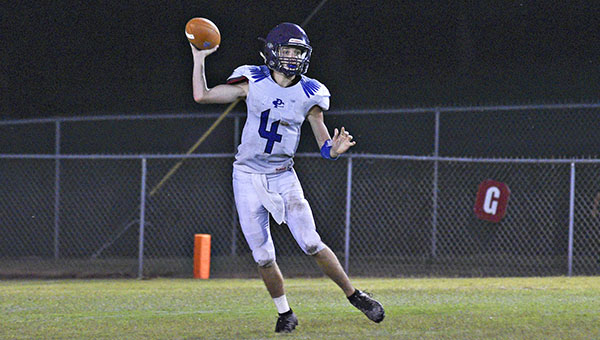 After two months of workouts, two weeks of practice, and plenty of anticipation, Porter’s Chapel Academy got to start its 2020 football season last Friday.

It did not go the way they’d hoped.

The Eagles surrendered more than 300 rushing yards and 46 consecutive points in a 46-12 loss to Benton Academy last Friday.

If any good came of it, it’s that the Eagles get to try nine more times this season, beginning with this Friday’s road trip to Newton Academy. Remembering that one game does not a season make has been a primary theme this week, PCA coach Blake Purvis said.

“You bounce back. You don’t work all offseason for one game. You work for a full season, and the season is not over. That’s one game and we’ve got to learn from it,” Purvis said.

PCA had a great start. It got a defensive stop on Benton’s opening possession, forced a fumble that it recovered, and then scored on the first offensive play of the season when Tyler Washington ran for a 61-yard touchdown.

After that, things went south.

The Eagles committed three turnovers in the first half that led to two Benton touchdowns. The Raiders scored twice in 15 seconds — a 1-yard run by quarterback J.B. Middleton to finish a drive, and then a 30-yard pass from Middleton to Landon Lowery following a PCA fumble — and led 26-6 by halftime.

PCA did not run an offensive play in the fourth quarter. Benton bled off the first five minutes with a touchdown drive, which pushed its lead to 46-6 and triggered a running clock.

Brayson Morson returned the ensuing kickoff 93 yards for a PCA touchdown, but more than half of the quarter was consumed by Benton’s scoring drive and the extended breaks between series.

Purvis said all of the mistakes and missteps the Eagles endured had one common factor — a lack of focus. He also said the loss seemed to be a wake up call for his players.

“We had a much better Monday practice than we did last week,” Purvis said. “I think they responded well. They realized some areas we were deficient in practice and how it affected them in the game. I saw some improvement in those areas (Monday), and hopefully we’ll continue to improve in our practice game. If we don’t practice with focus and effort, we’re not going to play with focus and effort.”

Turning to this week, the Eagles will continue to work on themselves since they don’t know how to work on Newton.

Newton routed PCA 54-7 last season, but has undergone a coaching change since then that will bring with it some new offensive and defensive schemes. And, like most other teams, Newton did not play a spring game or last week to provide Purvis with some film to study.

“We have no film. They even got a new head coach (Arnie Oakes). I’m not familiar with him, other than some staffs and teams he’s worked with. I know nothing about his scheme or anything of that nature,” Purvis said. “From what I know of his resumé, they will be a hard-nosed, physical, well-coached football team. We’re going to have to match that in order to have success.”

While not knowing anything about an opponent is not what you want coming off a loss, Purvis did say it will allow the Eagles to further focus on improving their own game. If they can do that, he believes they can’t help but have a better showing this time around.

“It’s a bad thing from a game plan perspective, because we have no idea what we’re facing. I feel like that puts our guys at a disadvantage, because we can’t prepare for some of the looks we’re going to get,” Purvis said. “From an improvement from last week standpoint, I guess it’s good. We can’t focus on what they’re doing. We don’t know what they’re doing. In turn, we just try to fix all the things we did wrong and focus on that.”

Limited number of fans will be allowed at Red Carpet Bowl

The 2020 Red Carpet Bowl will be a tough ticket, but there will be tickets. At a special meeting Thursday... read more