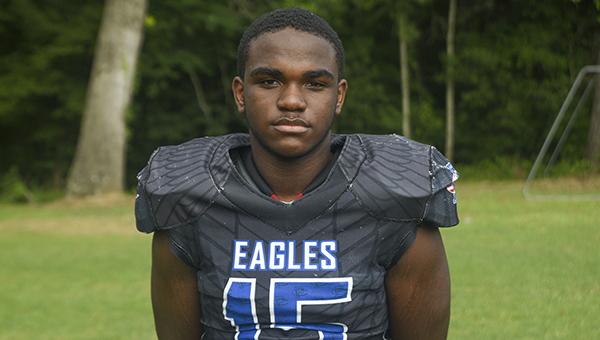 Porter’s Chapel Academy’s Tyler Washington had 61 rushing yards, 10 tackles and two sacks in a 10-0 win over Newton Academy on Friday.

PCA shuts out Newton Academy for first win of season

It wasn’t flashy. The stats were nothing to write home about. But it was a win, and that made it a night to remember for Porter’s Chapel Academy.

Tyler Washington scored the game’s only touchdown on a 45-yard run in the third quarter, and the Eagles rode a stout defensive effort to their first victory of the season, 10-0 over Newton Academy on Friday night.

PCA bounced back from a 46-12 loss to Benton Academy in its opener last week, and avenged a 54-7 rout at the hands of Newton last year. Both outcomes, PCA coach Blake Purvis said, showed how much and how quickly his players are improving.

“To get a redemption win is always good. It’s obvious we have improved a ton,” Purvis said. “Our guys that are stepping into roles really grew up a lot this week in practice. To see them make an adjustment this week was definitely good for our attitude and our psyche.”

The game was scoreless until the final second of the first half. An 18-yard run on a reverse by Braden Kapp helped set up a 25-yard field goal by Daniel Llopis that gave PCA a 3-0 lead with one second left in the second quarter.

In the third, the Eagles moved from their own 1-yard line to just across midfield, where the explosive Washington finished it off with his second touchdown run of the season. Llopis’ extra point made it 10-0.

In the fourth quarter, Jase Jung forced and Gage Ashley recovered a fumble inside the 5-yard line to stop a Newton drive. Then, with time winding down, Brayson Morson broke several tackles on a 10-yard run for a key first down that allowed PCA to run out the clock.

The Eagles finished with only 166 yards of total offense, but the defensive effort helped them snap a seven-game losing streak against Newton that stretched back to 2010. PCA also had just four penalties for 20 yards, compared to more than 100 penalty yards for Newton.

Washington had 10 tackles and two sacks, in addition to 61 rushing yards. Braden Kapp had 10 tackles, and Ashley had seven tackles to go with his fumble recovery.

“It was a total team effort. It was a very physical, hard-fought game, as you can tell from the score,” Purvis said. “We did not make the mistakes. We were able to build on drives and play a good field position game. Our defense obviously played outstanding.”

After playing its first two games on the road, PCA will play its next three at home. That run starts with an eight-man game against Deer Creek next Friday at 7 p.m.